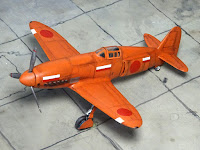 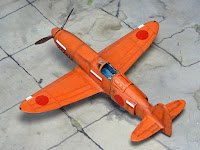 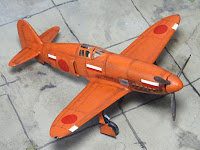 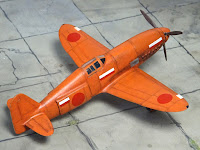 Some background:
The Kawasaki Ki-78 was originally designated KEN III and was a high-speed research aircraft developed to investigate laminar profile wings with high wing loadings. Early in 1938 a high-speed research program was started at the Aeronautical Research Institute of the University of Tokyo for a small single-seat aircraft.
The KEN III, designed at the Aeronautical Research Institute and built at Kawasaki Kokuki Kogyo K.K. to investigate flying behaviour at very high speed. All-metal construction was used in combination with a small thin wing with a laminar flow profile and a sharp leading edge. Furthermore, the research aircraft featured a streamlined minimum cross-section fuselage and was fitted with a licence-built Daimler-Benz DB 601A engine. For short duration power boost methanol/water injection was used, and cooling was improved by a 45 kW (60 hp) turbine driven cooling fan for the radiators in the rear fuselage flanks, leaning the wings as clean as possible.
By the outbreak of the war, the whole project was taken over by the Imperial Japanese Army who gave it the military type designation Ki-78. Kawasaki received the order to build two prototypes of the Ki-78, construction of which was started in September 1941. The first was completed more than a year later and was flown for the first time on 26 December 1942.
The engineers had ambitious plans: beyond the experimental nature of the aircraft the Ki-78 was earmarked for the absolute flying top speed record and the IJA was highly interested in a fast fighter derivative.
However, the Ki-78 was found to be extremely difficult to fly at low speeds and had poor stall characteristics. The aircraft was heavier than the design estimates, which increased the wing loading. Even with the special flaps and drooping ailerons, takeoff and landing speeds were both high at 127 mph (205 km/h) and 106 mph (170 km/h) respectively. In addition, elevator flutter was experienced at the relatively low speed of 395 mph (635 km/h).
High-speed flight tests were started in April 1943, and during the Ki-78’s 31st flight on 27 December, the aircraft achieved its maximum speed of 434.7 mph (699.6 km/h) at 11,572 ft (3,527 m). While this was basically an impressive performance, this was considerably less than the program’s speed goal of 528 mph (850 km/h). A feasibility study to improve the Ki-78 flight performance showed that extensive airframe modifications were needed and consequently the project was officially terminated after the 32nd flight on 11 January 1944. The second Ki-78 was never completed.
The single Ki-78 survived the war, but it was crushed by American forces at Gifu Air Field in 1945. 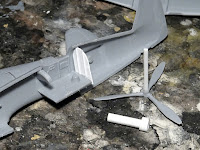 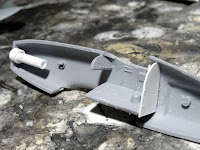 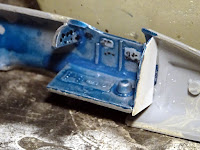 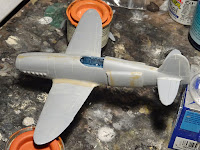 Painting and markings:
AZ Models offer the prototype in two liveries, the early NMF Ki-78 and the late scheme of the aircraft in overall orange. While this sounds simple, finding an appropriate tone that resembles the IJA trainer and prototype orange is not easy. Among the choice of six potential tones I eventually settled for Humbrol's 82 (Orange Lining), and for the basic painting I added a bit of 132 (Red Satin). Evyrething was painted with brushed.
After an initial overall coat the kit received a light black ink wash and panels were highlighted through post-shading/dry-brushing, and panel lines enhanced with a thin, very soft pencil.
All interior surfaces were painted with Aodake primer - actually a clear blue lacquer. In order to mimic this look, Cockpit and landing gear wells/covers were initially painted with aluminum (Revell 99), and, once dry, overpainted with a turquise, water-based clear window paint - a great contrast to the orange. 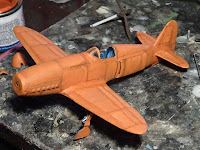 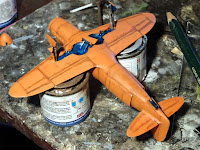 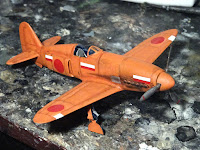 The decals come from the OOB sheet, and I added small markings at the wing tips - since only BW pics are available from the original Ki-78 I assume that these are white? Another addition are silver heat protection shields behind the exhaust stubs, also created with generic decal sheet.
After a little exhaust soot on the flanks with graphite the kit was sealed with acrylic varnish, in this case with a 4:1 mix of matt and gloss varnish, for a light shine.

A simple kit, realized relatively quickly, since it posed no major challenges. The result looks good, though, an elegant and beefy, small aircraft, and the orange livery stands out well. 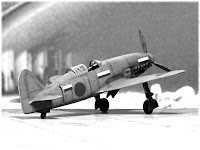 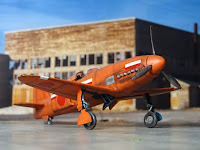 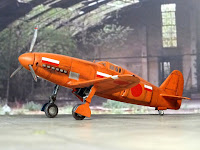 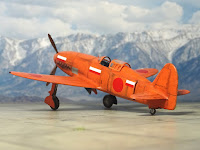 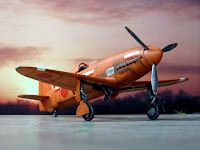 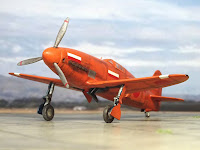 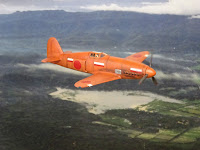 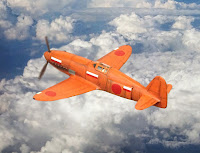 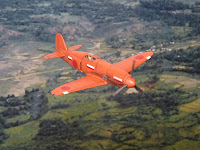 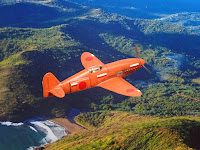 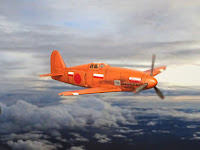 As usual the presentation is very good. The model is quite nice but unfortunately the wash stains are too prominent. The bottom in-flight photos are the best. Good overall effort! 4.2

An admirable job on a difficult kit. It looks to be hand painted, which adds points in my book (because that's how I build them) and it is 1/72 scale so more points for that. My vote is 4.5. I do like the "in action" trick photography.

I like the model very much although it's a bit crudely built (admittedly a difficult job in 1/72), and I love the photography. Dizzifugu is an expert in presenting his models. It shows that even a less sophisticated kit can look very realistic. To all other model presenters: go down 'on your knees' and take the pictures from an airfield perspective (white background needed only). Real planes are rarely seen from obliquely above (except from a control tower!) and distorted by close-up wide-angle photography - you will be surprised how much more convincing your build will look.
A 4.7 for your model, Dizzifugu.

Difficult kit in this scale,I really think that the finish is a little too weathered for an experimental job. Good job all the same. 4.5

A good job on a difficult kit. I will, however, say what others are saying about the weathering: A bit on the heavy side. The in flight and airfield scene photos are well done, as always. 4.5

Thank you very much. Yes, I build everything without an air brush, and my builds are primarily intended for the photography. As a consequence I do not waste much effort (anymore) on uber-dateiling (have been there), e .g. in the cockpit where noone will ever see it again.
I also "live with the flaws", like stains or uneven paint finishes. Real-life aircraft rarely look like the many "perfect" model builds of them. My aim is the overall impression, not the minute detail (also because my current main working field are what-if models, e. g. though kitbashes, which naturally tend to look a little rough). It's a very different philosophy from "normal" modelers. I know that this approach won't win anything in a contest like this, but I stick to it, and try to add a different angle to the hobby. ;-)

Really looking forward to the other builds, so much good stuff coming along!

"My aim is the overall impression, not the minute detail..."

Dizzy is from the Impressionistic School of model making. :-)

Dizzyfugu: No worries! I really like what you do with the photographs!

Lovely photo-art with an impressive model. Anyway I have to agree: a little too much weathering for a prototype. 4.6