Here are some photos of my entry for the latest online model contest. It is a 1/72 scale Tachikawa Ki-106 built more-or-less OOB from the RS Models kit. Continuing with my interest in Japanese aircraft under new management, I have chosen to represent it as evaluated by the USAAF after the end of the Pacific War.
Although the kit instructions suggest a green/grey finish, I have chosen to represent the aircraft in my interpretation of the so-called “late war brown”. My reasoning behind this is that towards the war’s end many Ki-43-III Hayabusas were evidently finished in the late war brown scheme. Since Tachikawa were responsible for the manufacture of those aircraft, then why would they not finish the Ki-106 in the same way? 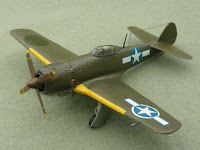 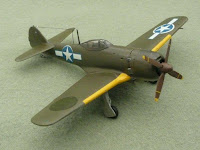 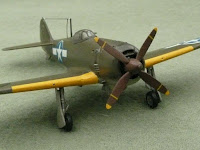 Displaying the model with US test markings makes a nice difference - good idea! Just two comments: Shouldn't the prop be painted in the late-war grey-green like on the Ki-84, and the star roundel overlaying the hinomaru would likely have the same diameter as on the starbord wing. A 4.2 for the unusual theme.

Interesting aircraft, and "under new management" as well. A little rough in some areas, but reasonably done. 4.3

This aircraft was made almost entirely of wood to save on strategic metals. It's one thing to make the skin of wood, but something else to do all the internal bracing.
Extra points for unusual subject and markings. 4.5

Intersting. Might have needed some more effort in painting out some highlights of the structure. 4.2