IJAAF Pilots
The subject of pilot uniforms is a long one and there are experts and collectors on the subject that for some reason they keep the information to themselves. As a result, AFAIK, there is no one good book and therefore below I will present the subject in broad strokes.
There were generally speaking three types of pilot uniforms the Japanese Army used: summer, winter and tropical. Especially for the summer and winter there were many different models, with small or bigger differences and variety of colours, characterised by the year they were introduced. Earlier uniform versions were in two-piece, during the war these changed to one-piece. The older versions were not retired and therefore it was very common to see in the same unit pilots with different uniforms. The best way to study the evolution of the uniforms is through photos of different student entries of the same flying school where the introduction of new uniforms can be seen year by year.
Apart from the official uniforms, especially overseas, pilots often used their own clothing sometimes purchased locally. As a result, although there was a standard type of tropical uniform, there were many combinations and variations.
One standard for all pilots regardless of weather or theatre was the boots. There were different kinds ofcource but it should be noted that boots was the prerogative of pilots and no-one else wore them. It was not uncommon though to dress a favourite ground crew in pilot's clothes for a photo session. It should be clear though that pilots NEVER wore puttes.
Below are photos of summer and winter uniforms that were worn mostly in Japan mainland but also the colonies, Manchuria and China. 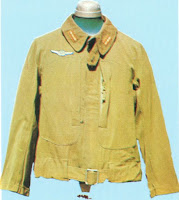 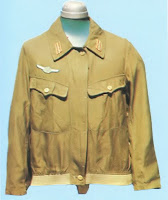 In the photos below you can easily tell the difference between the various models of summer uniforms. 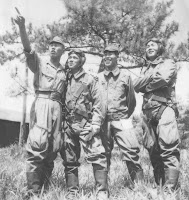 And in this set of photos are examples of winter uniforms. Life vests were worn by IJAAF pilots only during flights over water like escorting tokko aircraft from Kyushu to Okinawa. 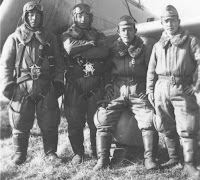 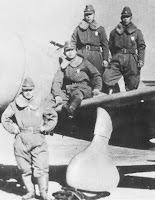 As you can see in all the photo above, when the pilots didn't wear their helmets they wore the standard Army cap the maintenance crew also put on.
Under the officers jacket the regulations provided for a certain type of white shirt that was worn as underwear in tropical climates. That was called "jyuban" named after a similar garnment worn under a kimono. 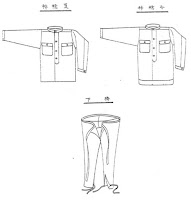 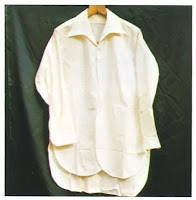 Very often pilots wore only this shirt, with the standard tropical long or short trousers.
Below are sample photos of IJAAF pilots in tropical uniforms. Note the large variety of clothing.

In the photos above and below the pilots are immediately distinguishable by the white jyuban and the boots. Ground crew wear khaki shirts (above) and Army short boots (below). 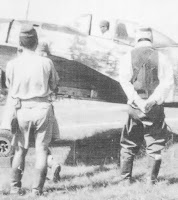 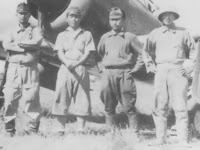 In the photo above things are more complicated. The first and third from the left are definitely pilots but the other two could be maintenance crew officers or pilots.
Finally, here's a set of photos in various settings.

The red and white shash indicated that this officer was on duty for the day. 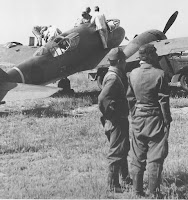 In this most interesting setting, the officer on duty is having a conversation with a pilot while the ground crew in the background are servicing their "Dinah". Note that none of the officers is wearing any parachute but the pilot has put on his helmet. This photo was taken in China and the white clothes worn by the maintenance crew indicate that either they are of low rank or were locally obtained.

A set photo with pilots, a ground crew on  a bicycle and family members on a formal visit.

In the photo above taken during the shooting of the movie "Kato Hayabusa Sento-tai", the pilots are seen wearing their jyuban during a break.
Artwork
Let's start with the various depictions of ground crew by Japanese artists.
First by Nakanishi Ritta in the book "Japanese Military Uniforms 1930~1945". 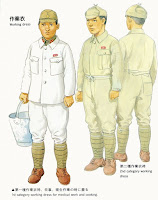 All the details in the uniforms are correct but unfortunately the puttes are wrong.
Artwork by the same artist was featured in DNK's "Imperial Japanese Army Air Units Battlefield photograph collection".

A little rough but the details are more correct.
Hasegawa Ichiro in Model Art #329 is more accurate and realistic. 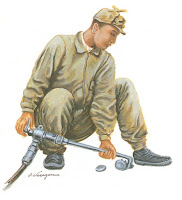 Nakanishi Ritta has also created artwork for pilot's uniforms in the book "RikuKaigun Kokutai" with the best maintenance crew illustration. 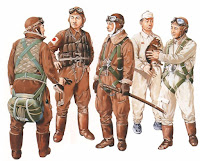 Hasegawa Ichiro's artwork is a bit more rough though. 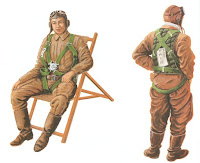