Ground crew pt.1
This part will not be about "equipment & stuff" but about the Japanese Army ground maintenance crew, their uniform and various poses often seen in photos (but rarely seen in dioramas).
The early uniforms of the ground crew were usually 2-piece, white, always with puttees. There were two kinds of uniforms worn during the Pacific War in the Japanese mainland, the most common was the "type 2". It was an one-piece, with a cloth belt and cloth straps on the legs but buttons on the torso and sleeves. Below are the official drawing and photos I found here (the guy is selling an original uniform) and here, with excellent explanation and details of this replica. 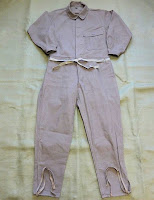 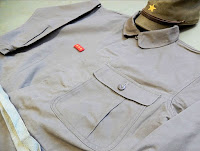 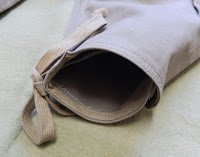 There were two kinds of field caps. The first is shown below. 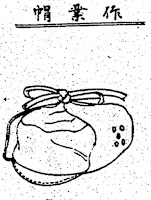 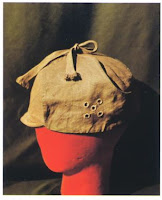 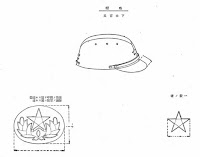 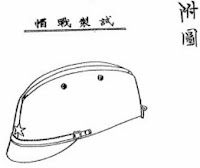 The maintenance crew wore at least two kinds of footwear. Very common were the "jika tabi" with or without split-toe but also the classic Army short boots and their variations made from pig, cow, horse or even shark skin. The soldier tied the bottom of his one-piece uniform, stuck them inside his white socks and tied the boots with the laces. Puttees were very rare for the ground crews except perhaps in the "Koku Shikan Gakko" (Army Officer's Academy) where things were more strict. 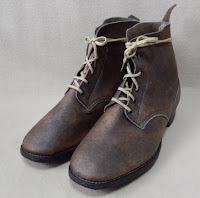 Again, this uniform was mostly worn at the airfields in mainland Japan, the Japanese collonies at the time (Korea, Taiwan), in Manchuria and occasionally in China depending on the unit and the location. As you can see in the photos the uniform became easily very dirty and the soldiers often unbuttoned the top and wraped it around their weist when the day was too hot leaving themselves half-naked or wearing undershirts. In the photos below note the different jika tabi, the Army boots and the different kinds of caps. 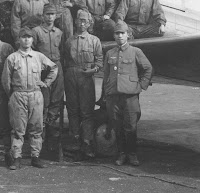 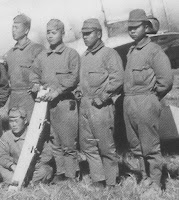 Note that the guy above is holding the drop tank attachment of a Nakajima Ki-44 "Shoki".
Climbing on the cowling, the wings or a ladder to service the engine. 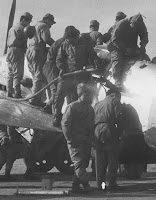 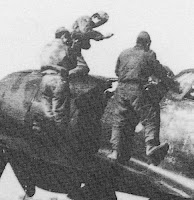 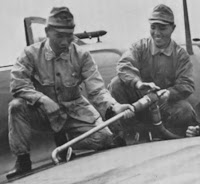 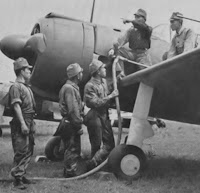 Loading fresh ammunition, on a "Hien" on the left on a "Shoki" on the right. 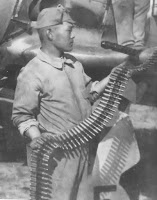 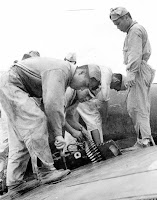 Starting the aircraft with a starter truck 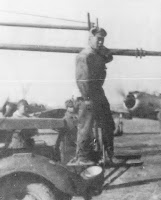 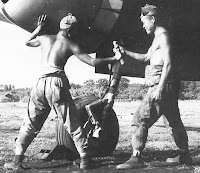 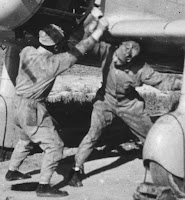 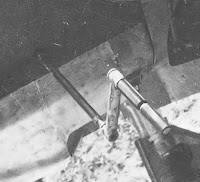 Waiting to pull away the chocks. 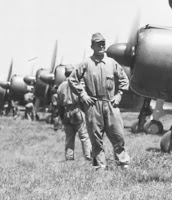 A few words before taking off.

Waving and wishing to the crew or running beside the aircraft to guide the pilot. 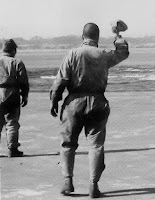 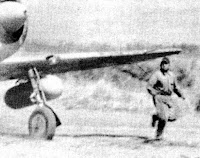 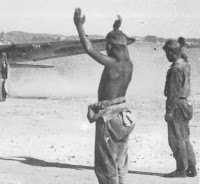 Note the bicycles in the photos below. "Dinah" on the left, "Hayate" on the right.

Excellent! Great presentation of the ground crews, very useful to modelers and artist alike. It's worth noting how the clothing fits, the creases and folds, also the stature of the people. (Sorry, the artist in me is coming out.)
And, there is no way to be clean when you are a mechanic!

Very informative, George. I built a few ground crew to compliment my models. There are some coming with my Shiden for the next contest. The various postures are very inspirational.
I thought that white working clothes were worn by IJN ground grew (white = traditional Navy colour), while the JAAF issued khaki dress for their maintenance guys??

I have not commented on this series yet but I wanted to say that it has been very enlightening and I have not seen anything like this before either in books or on the internet. Thank you and keep up the good work!