Blogs and sites who simply scan photos and post them on line can provide you, the modeller, with as many reference photos as you like to build your next model. But as you have probably noticed we are more interested to examine the background, the history of Japanese aviation so that at the very least you understand better what you are building. Naturally no historical research is perfect so we would love to hear your comments, corrections and additions. I’m starting this series of articles from the basics. The Hinomaru, the national marking of .

Since no official regulations have survived, there is an ongoing “debate” of shorts as to when exactly the Hinomaru was chosen as the national marking of . Most of the haphazard research done is based mainly on photographic documentation unfortunately with little consideration of the history behind the status and evolution of the IJAAF and IJNAF and even less of the civilian aviation. As a result, conclusions are drawn in haste often contradicting each other giving an aura of mystery when in reality there is really none.
Allow me to try to put things in order. I’m quoting mainly from “Japanese Aircraft 1910-1941”, Mikesh & Abe but also from a variety of other Japanese sources.
The first flight in took place on 19 December, 1910. The aircraft was an imported Henri Farman biplane piloted by Capt. Tokugawa Yoshitoshi. This captured public interest and turned attention towards aviation as a military weapon.

Not surprising for the time the very first Hinomaru is not found on an airplane but on an airship built in 1910 by Yamada Isaburo, called Yamada No1 Airship. No1 was damaged during a test flight and No2, which also had a hinomaru was destroyed in a fire.

The Army established an aviation section and, in April 1911, an airfield was laid out at while they purchased a Bleriot and a German-made Wright biplane.
The Navy established their own organisation in 1912. Lt Kono, Yamada and Nakajima (founder of the Nakajima plane manufacturer) were sent to the Curtiss flying school in the , while Lt Umehito and Kohama were sent to . On their return, Kaneko brought back two Maurice Farman seaplanes and Lt Kono brought two Curtiss seaplanes. These were assembled in 1912.
By 1914, both the Army and the Navy had expanded their aviation sections, whereby the Army had 16 aircraft and the Navy had 12. Not that many as you can see and they spent most of their time training. During ’s involvement in WWI, in 1914 the Navy with Farman seaplanes flew missions against German targets in while the Army flew four Maurice Farman and one Nieuport NG2 (IV/VI).

The above photo shows the Army Nieuport NG2 during that period. Note that although an Army plane, it bears the navy flag on the tail. No other photo of that period shows any form of tail marking either on the Navy or the Army planes. In other words, until 1914 the Maurice Farman did not carry any national markings in any form. 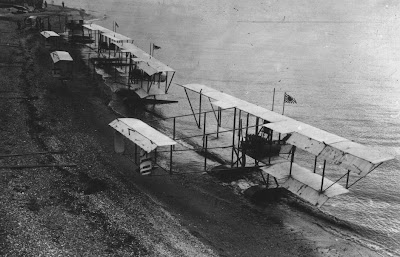 A photo with Farman seaplanes flying the Navy flag on a mast but with no other national markings.

The book "Shashin Kiroku - KOKU JIKO" [A Pictorial History of Aircraft Accident (sic)] by Nozawa Tadashi  features a rare photo (below) of two Maurice-Farman, number 9 & 10, involved in an accident during a Tokorozawa-Odawara flight on January 22, 1916. Their return flight was cancelled due to strong winds and the planes were securely fastened to the ground. At 11 o' clock of the same night strong winds blew them away ending up high on some nearby pine trees. This is the first photo discovered so far with Maurice-Farman sporting hinomaru. 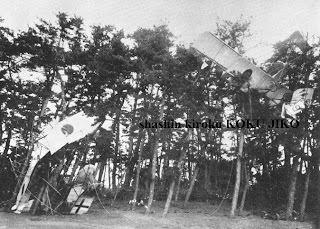 One of the very first aircraft built by/for the IJAAF was the Seishiki-1 the first and only prototype of which was completed on April 30, 1916. As can be clearly seen in the photo below it carries a hinomaru on the tail. 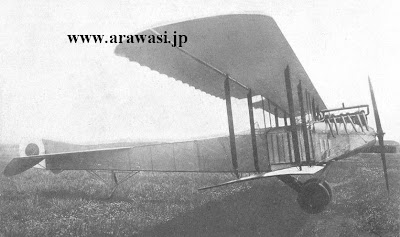 So, what can be safely concluded is that Japanese military aircraft started sporting hinomaru by 1916, perhaps starting some time earlier in 1915. This was the result of the expansion of the air forces and their involvement in overseas military operations.

Stay tuned for Part #2 to be posted tomorrow.
Posted by Arawasi

Question: in 1910, was Japan's national flag the hinomaru on a white field, just as it is today?
If so, it would seem that the Yamada airships were simply "showing the flag"; a very logical thing, IMHO. That as opposed to devising some other symbol(s) which would proclaim them as Japanese (chrysanthemum, perhaps).

Most interesting is the use of the naval flag on a army aeroplane. Painting the entire rudder makes it appear like the flag at the stern of a ship. On my monitor, I cannot see any other markings on that a/c; correct?

This is a fascinating topic; I look forward to more.

I have been looking forward to reading
your comments about HINOMARU on this site.
Expecting Part #2 or more.

Harold, from what I can tell from other photos of the Yamada airships in MA#327 the red disc was indeed surrounded by white as the national flag of Japan was and still is. Important details are that the hinomaru was painted on both airships and on the "rudder" of the airship; it's not just hanging there.
For other symbols and more info please wait for the forthcoming parts.