As we saw in the first part the  last battle of IJNAF was in Tsingtao in 1914. Between that and the arrival of the French mission in 1919 the Navy spent most of their time training new pilots and testing new types of aircraft, especially seaplanes. Some of them were the Deperdussin Type 1913, the Sopwith Schneider fighter and the Short 184 torpedo-bomber. One or two samples of these were imported from overseas but none of them carried any hinomaru. At the same time, the Navy was developing their own seaplane designs like the Yokosho-Nakajima Tractor Experimental Seaplane and the Yokosho Hogo-Otsu.
The first successful Japanese seaplane design that was accepted by the Navy was the Yokosho Ro-Go Ko-gata (covered in Arawasi International #9) which was completed by the end of 1918 and although placed under production, it was not until 1923 that it was officially accepted by the Navy. Initial examples of the Ro-Go do not seem to have any hinomaru. Instead, like the Maurice-Farman, simply had their individual number on the tail in Japanese numerals. Nevertheless, from a certain point onward they all have hinomaru in the six positions as shown in the photo below together with the first unit tail markings on the tail. 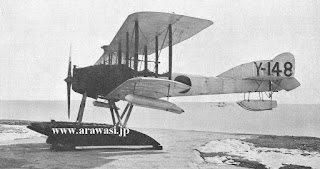 Yokosho Ro-Go
Imperial Japanese Navy pilots trained with the French mission either with Maurice-Farmans without hinomaru as usual or with other aircraft types having hinomaru. In other words what can be concluded is that Navy airplanes started consistently using hinomaru from sometime in 1919. The reason for this later than the Army adoption of the national marking is that simply the Navy didn’t participate in any overseas engagement like the Army in Siberia, and didn’t have the urgent need to apply the marking on the few examples of imported aircraft they were testing.
After the departure of the French the Navy started importing airplanes from the British, to get into the eye of the Army but also because the British were considered to have more experience with aircraft flying over the sea as opposed to the French who were considered to have more experience with air operations over land. By 1921 the Navy invited their own group of foreign instructors, this time British. They arrived with aircraft like the Avro 504K trainer, Short Reconnaissance seaplane, Gloster Sparrowhawk, Parnall Panther, Sopwith Cuckoo, Blackburn Swift, Supermarine Channel and F.5.
Upon arrival these types were photographed without hinomaru but with markings applied by the British manufacturers indicating they were destined for Japan. The fuselage markings consisted of the type of the aircraft and the letters “JN.” (Japanese Navy) followed by the serial number of the individual aircraft accompanied by a large “J” on the tail. 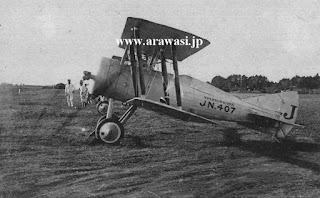 Gloster Sparrowhawk. 50 of these fighters were imported starting from 1921. 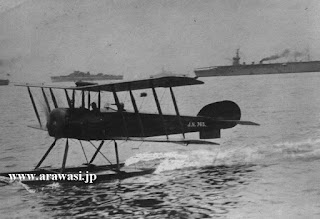 Avro 504 Roe trainer, seaplane version. A total of 78 examples of the Roe type were imported starting from 1921 until production was taken over by Nakajima (250 examples) and Aichi (30). Note again the “J.N. letters on the fuselage and the overall color. The aircraft carrier on the right is "Hosho". 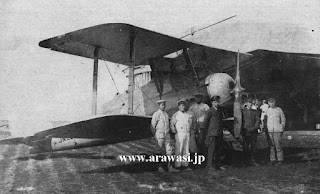 Parnall Panther carrier reconnaissance. Unknown numbers were imported in 1921. Again “JN” on the fuselage and a British with Japanese Naval officers and ground crew.
"Tayha" commented:
"According to records in UK and Windsock Datafile 142, 12 panthers went to japan along with various other aircraft. Constructors (Bristol Aircraft) s/n,s 6128-6139.
Some other pictures of Japanese Panthers also in Datafile." 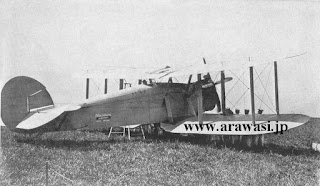 Blackburn Swift carrier torpedo-bomber upon arrival to Japan. Note the luck of any markings except the company logo on the fuselage.
While these photos were taken when the very latest additions to the Navy air fleet first arrived to Japan, every single of these aircraft came to carry hinomaru on all six positions (wings top/bottom and fuselage sides). Initially the hinomaru were applied together with the British factory markings like on this Sparrowhawk below: 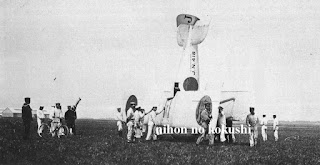 The replacement of the Ro-Go seaplane was the Hansa Brandenburg W.29 (covered in Arawasi International #7), known in Japan as Hansa-shiki (Hansa Type). The type first arrived in Japan in 1921 as part of the war reparations from Germany. The Navy liked it and instructed Aichi to make the necessary modifications to start production domestically. After the initial prototypes production started in 1924 until 1926.
There are no photos of Hansa seaplanes without hinomaru except in civilian service. Interestingly many clear photos show the Hansa hinomaru with a white surround as shown below even though they don’t seem to be camouflaged. 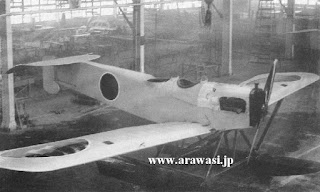 According to records in UK and Windsock Datafile 142, 12 panthers went to japan along with various other aircraft. Constructors (Bristol Aircraft) s/n,s 6128-6139.
Some other pictures of Japanese Panthers also in Datafile.