One of the least known books about the Kawasaki Ki-45 "Toryu" (Nick) is a pocket publication by Watanabe Yoji, published by Sankei Shupan, December 1983 entitled simply "ARMY FIGHTER Ki45-Kai", number #96 in their "Dai Niji Sekai Taishen Books" series.
The back cover features a very interesting photo never reproduced in any other publication; a Ki-45 with four B-29 kill markings painted on the fuselage side behind the observer. Note also that nobody has ever created artwork of this plane. According to the caption the photo was taken in Matsudo airfield in 1945 and the Ki-45 Hei belonged to the 53rd Sentai. It is the only "Toryu" we know of with that many kill markings and on this specific position but unfortunately there is no further information regarding the identity of the crew or the hikotai to deduce a tail marking.
The leading ace of the 53rd Sentai was M. Sgt Negishi Nobuji and his radio man T. Sgt Torizuka Moriyoshi, both recipients of the "Bukosho". The pilot in the photo does not look like Nobuji though and we were unable to find any other 53rd Sentai pilot with more than three B-29 claims. Your suggestions are welcomed. 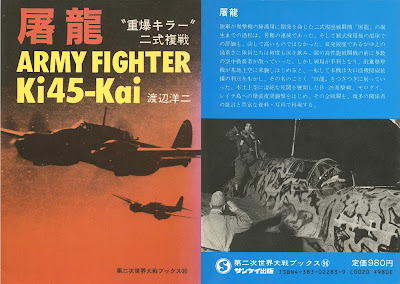