On October 21, 1934 a big ceremony was held to celebrate the purchase of three aircraft by "Dai Nippon Giyu Hikokai" (Great Japan Volunteer Aircraft Association). It was the result of an admirable effort by children from all over the country to gather the funds for these aircraft by collecting no less than 52 tons of tin foil from cigarette packs and toothpaste tubes. The slogan of the campaign was "Every year 1,500 aircraft and 1,000 pilots" and was supported by star pilot of the time Baron Narahara (see future post). Even more amazing than the purchase of the three aircraft was the fact that the amount gathered was enough to build an airfield! It was located in Atsugi, Kanagawa Prefecture on the bank of Sagami river built by volunteers living in the area who cleaned up the rocks and worked to pave the field. It was nicknamed "Giyu Hikojo" (Volunteer Airfield) and the three aircraft became appropriately known as "Gingami Hikoki" (Tin Foil Airplanes). 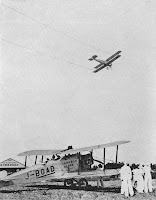 The photo above, from a vintage publication, was taken during the ceremony which started at 11:00 with an opening speech by Baron Narahara. It was attended by Prince Kaya-no-miya Kuninaga and Kaya-no-miya Harunori and included flights of the three aircraft as well as a parachute drop by Ms Nishiyama Sumiko before ending at 13:30. The aircraft on the ground is a Navy Type 10 Carrier Reconnaissance or Mitsubishi 2MRT1, registration J-BGAD, while the one flying above is probably an Avro Roe 504 K/L Trainer but the registration is not clear.

Although the whole "Giyu Hikokai" effort was very promising appealing to teenagers interested in aviation, as with so many things Japanese aviation related, within a year from the opening ceremony was plagued by personal strife that resulted in the resignation of Baron Narahara and the dissolution of the association. Since the airfield was built on a river bank it was soon hit by floods, was abandoned and now there is absolutely nothing left in the area. An inglorious end to a brave effort.
Posted by Arawasi