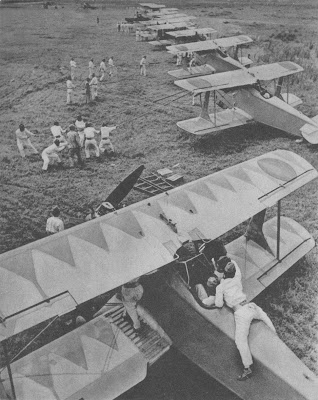 As a follow-up of the previous posting of September 8, we feature today another photo of that unusual Army Type 92 Fighter or Kawasaki KDA-5.

zegeye asked: Why do you believe that ''saw teeth'' are red? Do you think that cover author colored this photo in wrong way?
Reply: from the photo above it seems that the hinomaru is basically the same colour with the "saw teeth". So, I believe the cover was colorized to show the hinomaru more prominently and make it clearly for the readers that the a/c is a Japanese one. Note that nothing else is coloured in the cover photo.

Nevertheless, our friend Yokokawa Yuichi sent us the scan below from the book "Zoku. Nihon Kesakuki Monogatari" (Tails of Japanese Masterpiece Aircraft, Pt.2) which shows that the "saw teeth" fall exactly on the plane's ribs, adding though that he has no idea why the plane looks like that. Note that no other KDA-5 in the photo looks the same. So, is it paint or something else?

This is very cool, from the image of the wing structure it looks like it was purposely designed that way, not just for something artsy. Maybe to test if interlocking panels improves the resistance to twisting. Just throwing it out there.