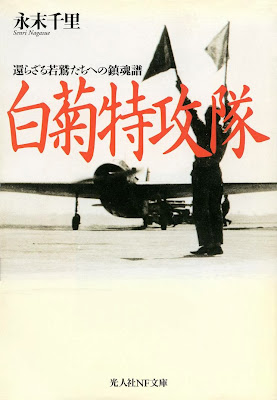 Nagasue-san was born in 1927 in Fukuoka prefecture. Joined the Navy with the Yokaren (short for Yoka Renshu-sei, Flight Reserve Enlisted Trainee) programme in August 1943 Class Ko 12 and was assigned to Kagoshima Ku, then from March 1944 to Yatabe Ku. In July of the same year he trained with Type 97 Carrier Attack Bomber or Nakajima B5N "Kate" in Hyakurihara Ku to become carrier attack bomber pilot. Six months later his next assignment was the 903Ku where he concluded his training as a "Kate" pilot but also ship escort and anti-submarine patrol. From March 1945 became a member of the Oi Ku and the "Yashima-tai*" kamikaze corpse of the unit flying Kyushu K11W Shiragiku. While undergoing training the war came to an end. After the war, he joined Koku Jietai (Japan Air Self-Defense Force, JASDF) in February 1955 retiring in February 1977.
This most interesting small book is a brilliantly detailed account, describing the career and experiences of Nagasue-san but featuring also many technical details about flying the various types of aircraft he encountered.
As with other books in our library series this is another one for Japanese readers only. No technical illustrations of Shiragiku, photos or material helpful to modellers.
*"Yashima", literally "eight islands" is a very old name of Japan in Yamato Kotoba. According to Kojiki Japan was created from eight islands (Honshu, Kyushu, Shikoku, Awaji, Iki, Tsushima, Oki, Sado). Eight is a number with deep spiritual meaning in Japanese mythology and signifies "abundance"; therefore the meaning of the name is to signify that Japan is a country made of many islands.
Posted by Arawasi

Very interesting, I only wish I read Japanese! Yet another book that would be nice to see translated.
The notes on the meaning of "yashima" are also very welcome. Tying in the culture and meaning of names and places really gives a better understanding of the Japanese people.
Thank you!