One of the lesser known aviatrices was the Hon Mrs Victor Bruce, the first to circumnavigate the world. A truly amazing woman with a most interesting life.
Here's what Wikipedia has to say about her trip:

[Around the world flight 1930
In June 1930, on a whim, she purchased a Blackburn Bluebird IV via a London showroom. After delivery of the aircraft (G-ABDS) in late July 1930, she took her first flying lessons with Norman Blackburn at Brough aerodrome, went solo within a week, and soon built up 40 flying hours. On 25 September 1930, she named the aircraft "Bluebird" and took off on a round the world solo flight from Heston Aerodrome. She flew to Rangoon and then on to Shanghai and across the Yellow Sea to Seoul, Korea. On 24 November 1930, having covered 10,330 miles (16,625 km) in 25 flying days, she reached Tokyo. She travelled by ship to Vancouver, where the Bluebird was re-assembled. She flew via Medford (Oregon), Tucson, San Diego and Baltimore to New York, where she embarked on a ship bound for Le Havre. On 19 February 1931, she flew to Lympne Airport, having flown about 19,000 miles (30,577 km). She was the first person to fly from England to Japan, the first to fly across the Yellow Sea, and the first woman to fly around the world alone (crossing the oceans by ship). The five-month journey had been marked by forced landings beside the Persian Gulf, also at San Diego and Baltimore, a near-abduction by brigands, and a forced landing in a southeast Asian jungle during the monsoon. On 20 February 1931, she was given an aerial escort by Amy Johnson, Winifred Spooner and others to Croydon Airport, where a reception of press and celebrities awaited her.] 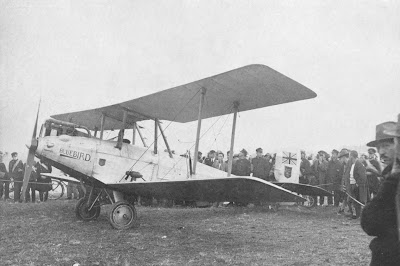 The photo above, from a vintage publication was taken during her arrival in Tachikawa.


On November 21, 1930 at 8:25 she took-off from Seoul arriving over Hiroshima at 13:20. She flew over the city twice and was then escorted by an Asahi newspaper airplane to Osaka airport where she arrived at 15:14. She was greeted by the British consul and other dignitaries, stayed in "Osaka Hotel" and attended at 20:00 a party on her honor by Osaka Asahi Shimbun.
The next at 13:30 she gave a speech at the Asahi newspaper hall entitled "Flying to Japan" which was followed by a tea-party in Kobe.
Two days later, on the 24th at 11:25 she took-off from Osaka escorted by an Asahi plane, landing in Tachikawa airport at 13:40 from where she was taken to the "Imperial Hotel" by car.
The next day she was awarded the "Yukosho" (Red Cross Order of Merit) during a ceremony held by the Teikoku Hiko Kyokai (Imperial Aeronautic Association).

HERE is a link with more information about her whole trip (don't forget to follow all 3 links: DATA FILE | THE FLIGHT | MAP OF THE FLIGHT).
Posted by Arawasi