Japanese servicemen who served overseas were often too far away from their homeland, occasionally isolated, with provisions arriving irregularly and never in sufficient quantities. Sometimes within the cargo there were special packages from Japan called "imon bukuro" (relief or console packages).
HERE you can see a short news clip from the NHK collection talking about these "imon bukuro" and the effort behind the people in the homeland to send the servicemen in the front little things to show their support.
Women from an "Aikoku fujinkai" (patriotic women's association) gathered together on a hot summer day to make little cute appreciation presents to cheer the hearts of the soldiers.
The 8th elementary school of Yamagata prefecture organised an excursion and encouraged the students to create Japanese landscape sketches to show their support to the soldiers at the front.
In a Tokyo elementary pupils made camouflage nets in the hope that they could be of use to the servicemen.
Another NHK clip, HERE, shows how appreciated these little objects were by the soldiers, especially the little dolls. The unit is the 44th Sentai, somewhere in China, and the aircraft in the background are Type 99 Assault Planes or Mitsubishi Ki-51.
Below are two photos from vintage publications showing these dolls adorning a Type 96 Attack Bomber or Mitsubishi G3M "Nell" cockpit in the top photo and an IJAAF aircraft in the bottom. 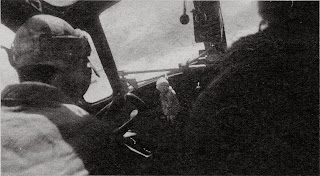 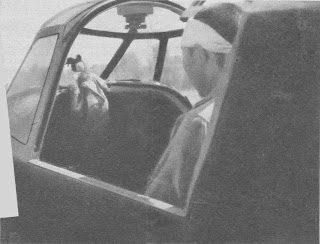 We are not sure about the aircraft type in the bottom photo. Note that the canopy folds to the starboard. Possibly a Mitsubishi Ki-46-II "Dinah" but the shape of the fuselage behind the canopy is not right. Any ideas?
Hi, the cockpit in today's blog is a Kawasaki Ki-48 Lily.
- Joe Picarella -
Thanks, Joe!
Finally we would like to mention that many Japanese servicemen carried with them omamori (amulets, φιλακτά in Greek). These were sometimes taken as souvenirs by Allied soldiers and many years later we have found ourselves in the rather awkward if not gruesome position to be asked to translate what the contents include; cultural differences and ignorance are understandable as long as they are always accompanied by respect towards the opponent.
Posted by Arawasi