Two photos from a vintage “Domei Graph”, March 1943 issue featuring a Zero transported somewhere in the Pacific. Photos of the same ship and aircraft are featured in many publications.
In FAOW#5 (1987), p.26 the caption says: Summer 1942, a photo of a Nakajima Model 21 transported by ship from the mainland. Photo taken in Rabaul. The white surround of the fuselage hinomaru indicates that this is a Nakajima produced aircraft. Mitsubishi stopped producing the Model 21 and started producing Model 32 from May 1942. Production of the Model 21 was taken over by Nakajima which begun the mass production of the type from November 1942. .
On the other hand, in the later published FAOW#55 (1995) p.58, the caption says that the photo taken around the end of 1942 and that the Zero Model 21 was transported by ship to Truk island.
The ship and the exact location remain unknown. 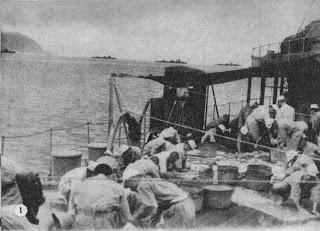 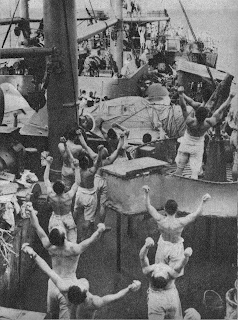