Today we would like to share with you a number of very interesting glider photos and material but we would also like to show you the tedious and time consuming process necessary to gather all this information and material.
Everything begun about two weeks ago when our good friend Jacob Terlouw sent us the photo below (with permission to feature it on this blog) asking for further information.

Immediately we consulted the best post-War source for Japanese gliders, the Model Art publication "NIHON NO GURAIDA 1930-1945" (The gliders of Japan 1930-1945) by Kawakami Hiroyuki.

Unfortunately we couldn't spot any photo or illustration that would have a glider like the one in Jacob's photo therefore we turned to the best two vintage glider publications. First "Kakuki 1890-1941" (Gliders 1890-1941) by Asahi Shimbun in August 1941.

We found that the glider in Jacob's photo, registered B-202 and the one behind it, B-203, were in the truly amazing photos taken during the "Dai 1kai Zen Nihon Guraida Taikai" (1st All Japan Glider Competition) held in mount Kirigamine, Nagano prefecture. 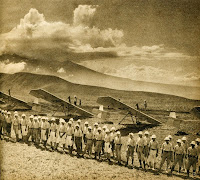 But nothing else is mentioned. The second vintage book "Kaku Nihon Rekishi Shashin-shu" (Glider  Japan Historical Album) by Koku Jidai-sha, published in August 1943, had some more photos of the event but of poor quality.

According to the accompanying text the event took place for three day starting on September 2, 1936 and was sponsored by Asahi Shimbun. 75 were the competitors in the primary glider class, 22 in the secondary glider class and five in the soarer.

Before the beginning of the competition a referee is explaining to the competitors some of the things they should be careful about.

Some of the spectators that gathered to watch the competition.

Members of the competition committee and a journalist. From right: captain Fujita Yuzo, major Suzuki Masahiro and Watanabe Kazuhide.
Going back to the "Nihon no guraida" book the event is mentioned but the only additional information is that the event was supported by the Ministry of Communication, the Army headquarters and Imperial Aviation Society. 20 primary gliders, six secondary and six soarers were flown by no less than 42 glider groups. Much to our frustration the glider types were not mentioned in any publication, therefore we couldn't identify the glider in Jacob's photo.
While going through a vintage magazine, "Hiko" (Flight) April 1939 issue,  for our current publication project (secret!), we encountered two photos of the same glider type.

According to the captions: "First time in Japan gliders on ice! The Kamisuwa Glider Research Group is training on the frozen lake Suwa." In a small article featured in the same issue it is explained that the Kamisuwa Glider Research Group borrowed from the Nagano headquarters of the Aviation Society one Type Ito Primary with the registration B-203. Thus we found the type of the glider. Going back to "Nihon no Guraida" we found that the type was named Type Ito A-1 Primary and was based on the Schneider Grunau 9 glider. Wing span: 10.3m, length: 5.54m, weight: 90kg. The glider was built by Ito Hikoki Seisakujo (Ito Aircraft Factory).
Unfortunately we were not able to find out who exactly the officer in Jacob's photo was but most probably he is a Marine.
We hope our readers will acknowledge and appreciate the fact that our blog is the only one among the well-known blogs and message boards that touches on the highly overlooked subject of the Japanese gliders.
Posted by Arawasi


Hi George,
Great!!! This surpasses my expectations by far. We know now where and when it was and even the type of the gliders used and all that with some fine illustrations. The comment by the photo I bought was :"Japan circa 1910". This big event was in 1936! Thanks a lot for this perfect sleuthing.
One last thing, one of my first experiences with aviation, I was 13 years old at that time-was flying in a (two-seater) glider!

Thank you too Jacob for sharing the photo with us and for the tedious but very interesting project.

Thank you for the useful glider reference. I have been using your blog for research on some glider photographs.

I recently acquired several books of vintage Japanese negatives and I believe that some (if not all) of them are from Kirigamine Japan in the 1930s.

I am in the process of scanning them and uploading them to Flickr now. If you have any thoughts on the 1930s glider pictures, please feel free to comment (or even use the photos on your blog):
https://www.flickr.com/photos/vintage-japan/sets/72157649785007691

I have scanned only one of the five negative books, and I don't know what the others contain, so it will be a work in progress.

Thank you again for the information that I have gained from this blog.