Seaplanes in the South Pacific

Some stills today from a vintage news reel from the NHK collection. The date is October 1942 and the exact location is not specified except for the general South Pacific.
In the first three a number of Type 0 Reconnaissance Seaplanes or Aichi E13A1s are seen resting on a beech. The tail marking of one of them is fairly visible and it looks like starting with the letter "R". This would mean that they probably belong to the Seaplane Tender Kiyokawa Maru which was operating in the Rabaul, Kavieng, Salamaua and Tulagi areas at the time. 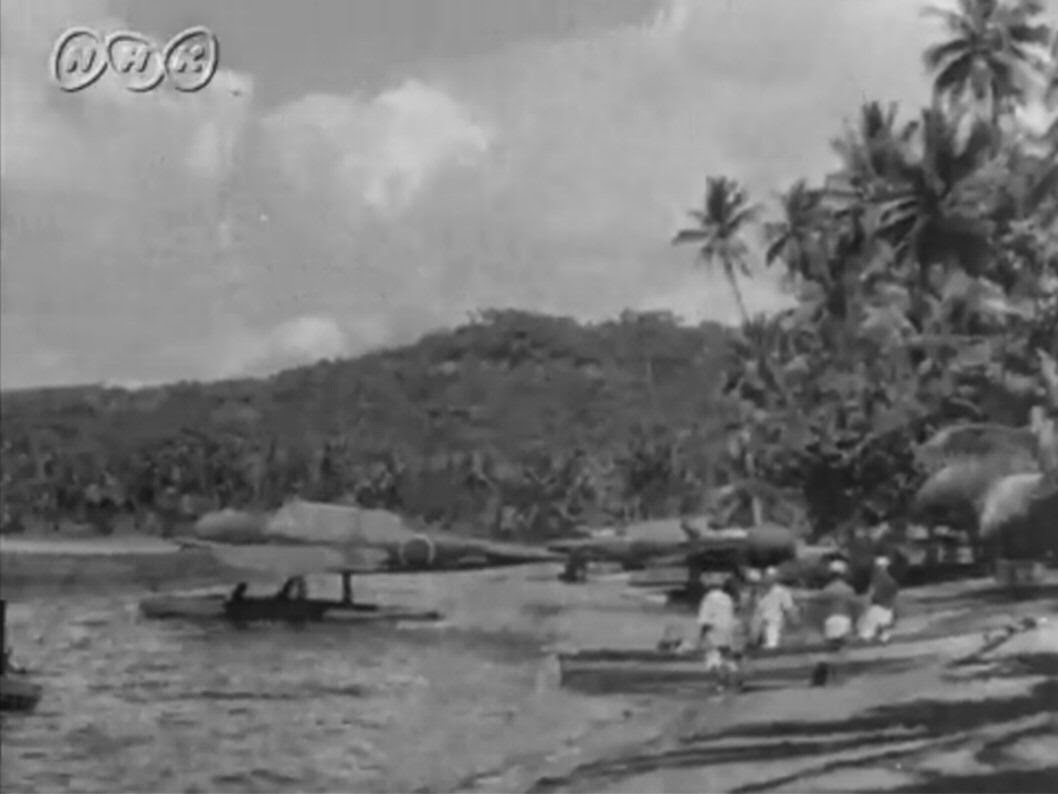 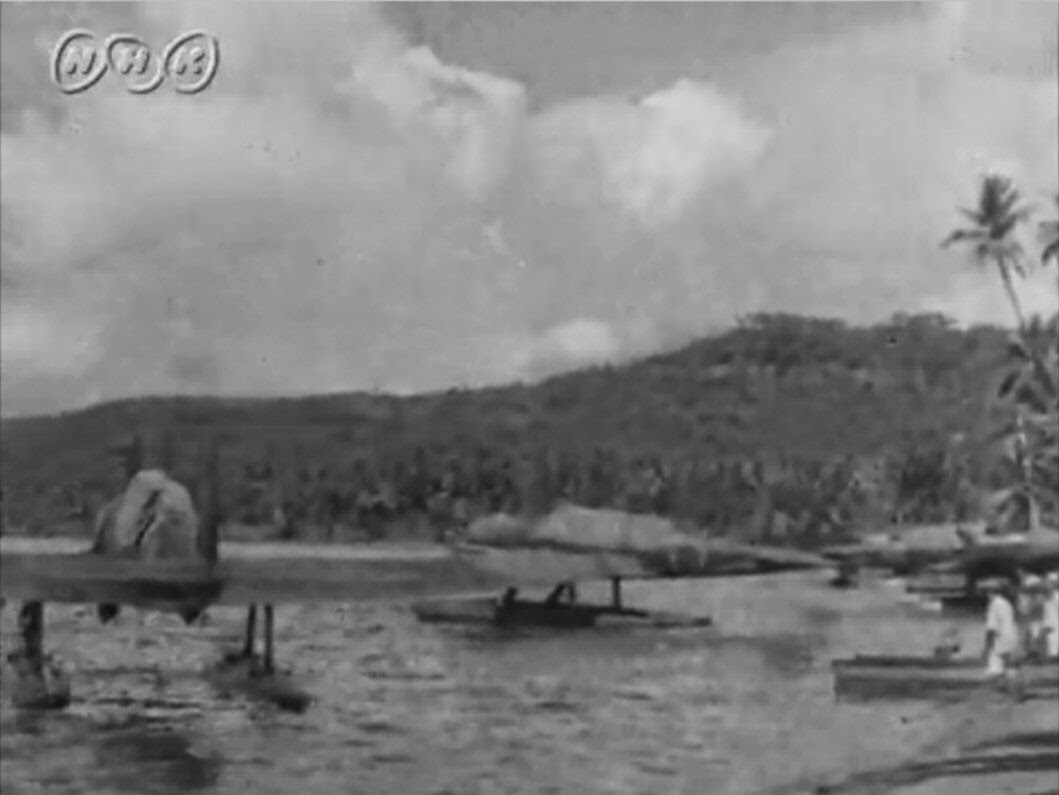 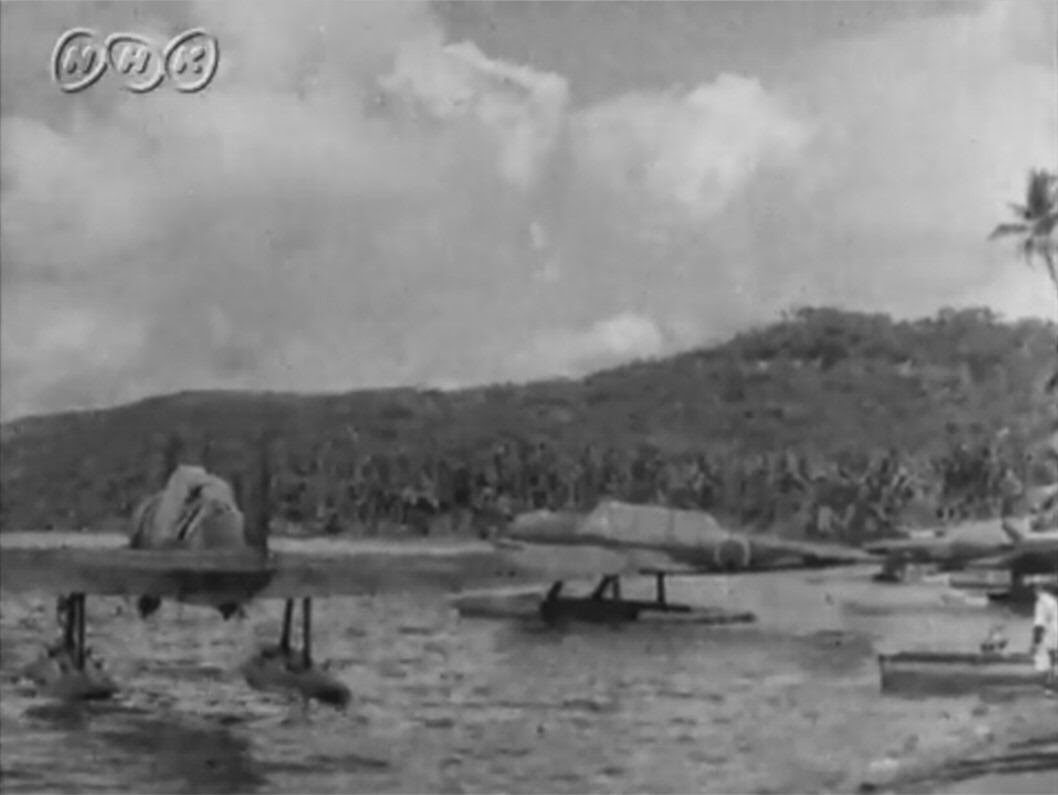 The rest of the stills feature Type 95 Reconnaissance Seaplanes or Nakajima E8N having their engine dismounted, their crews briefed and taking off armed with two 30kg bombs on another mission. Unfortunately the tail marking is not visible. 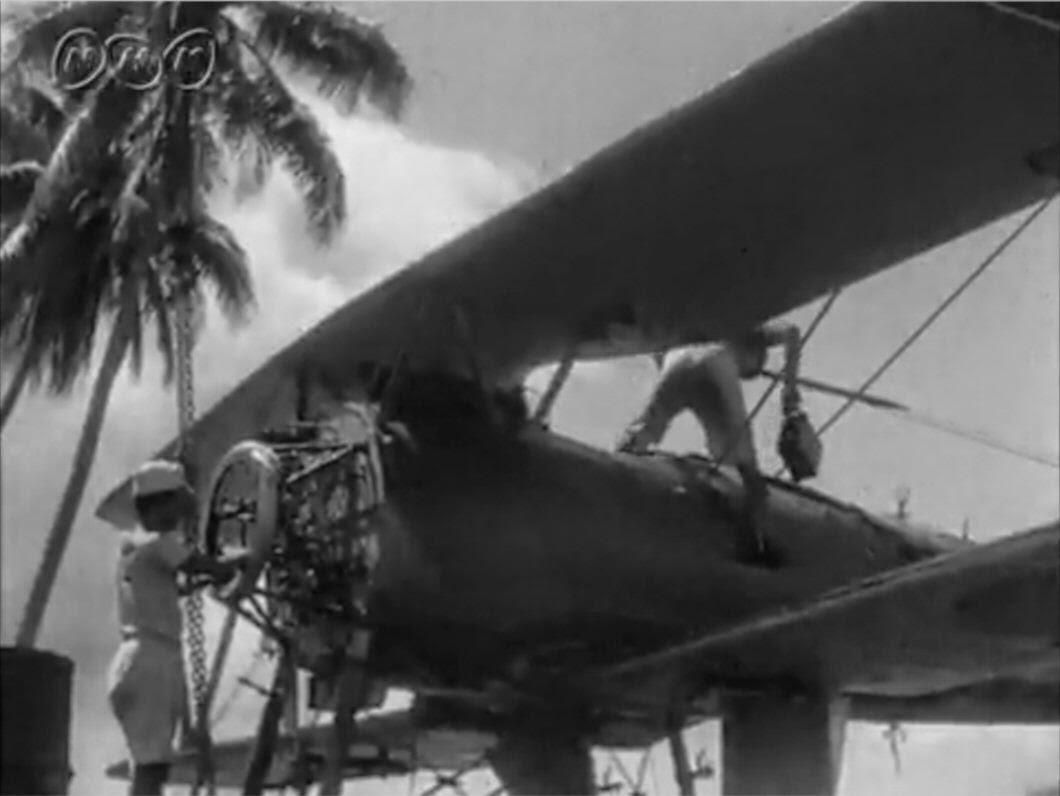 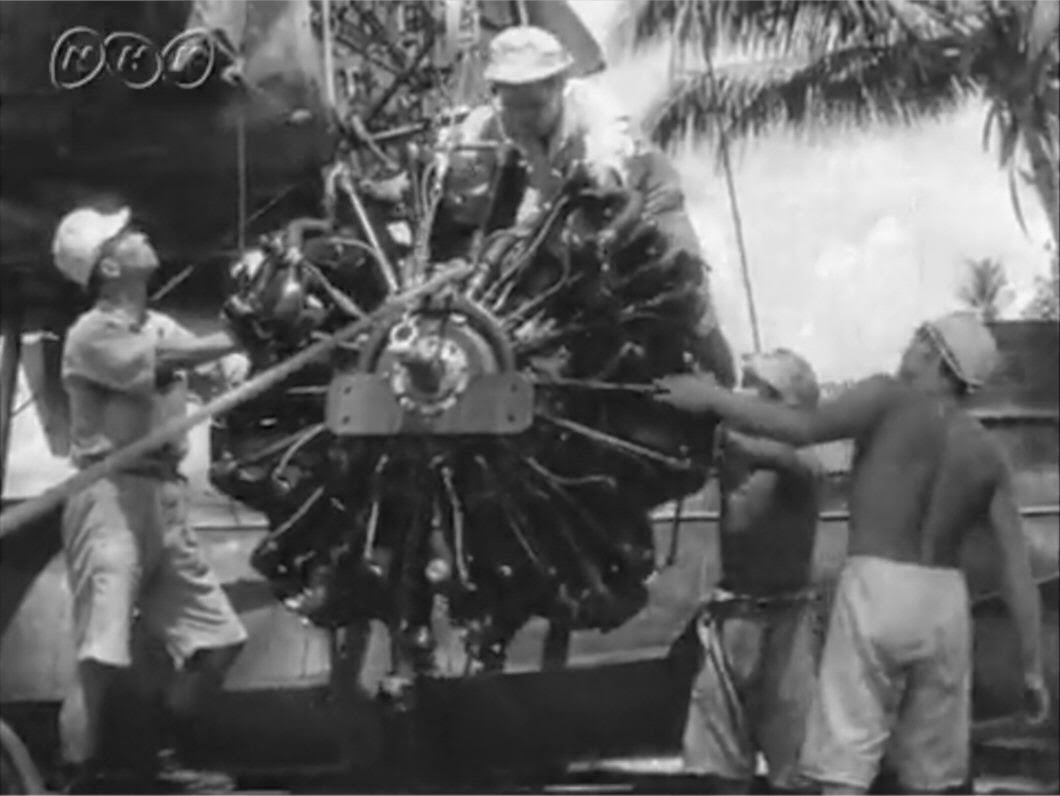 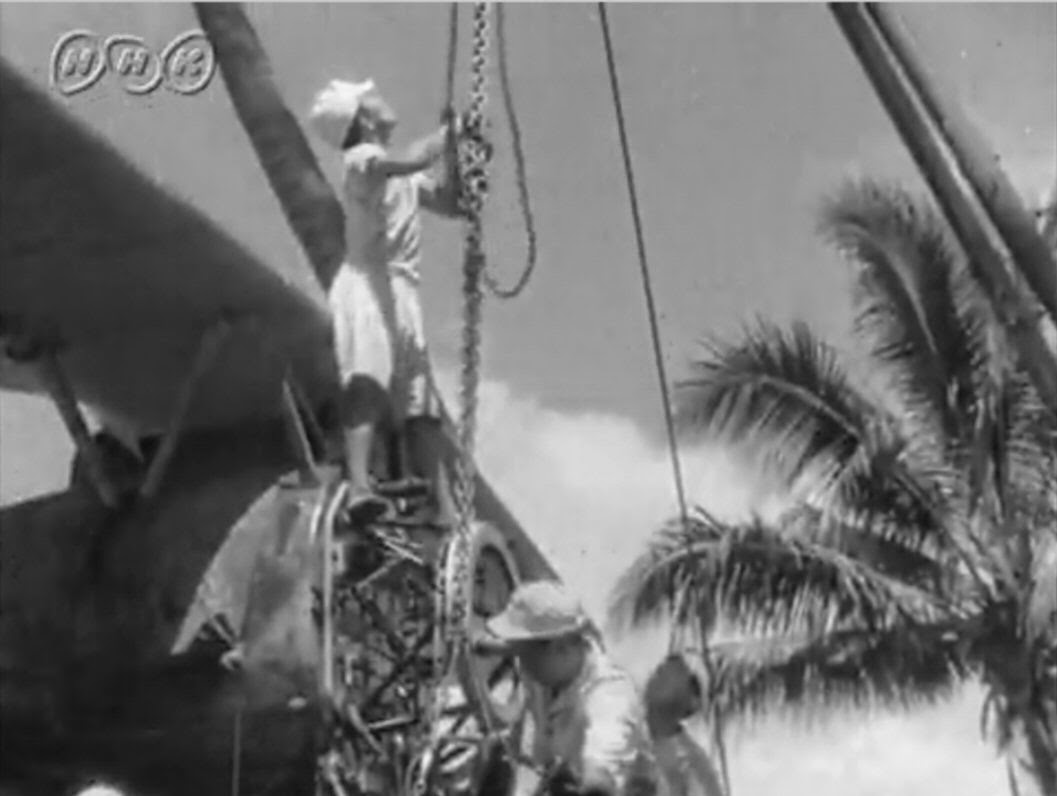 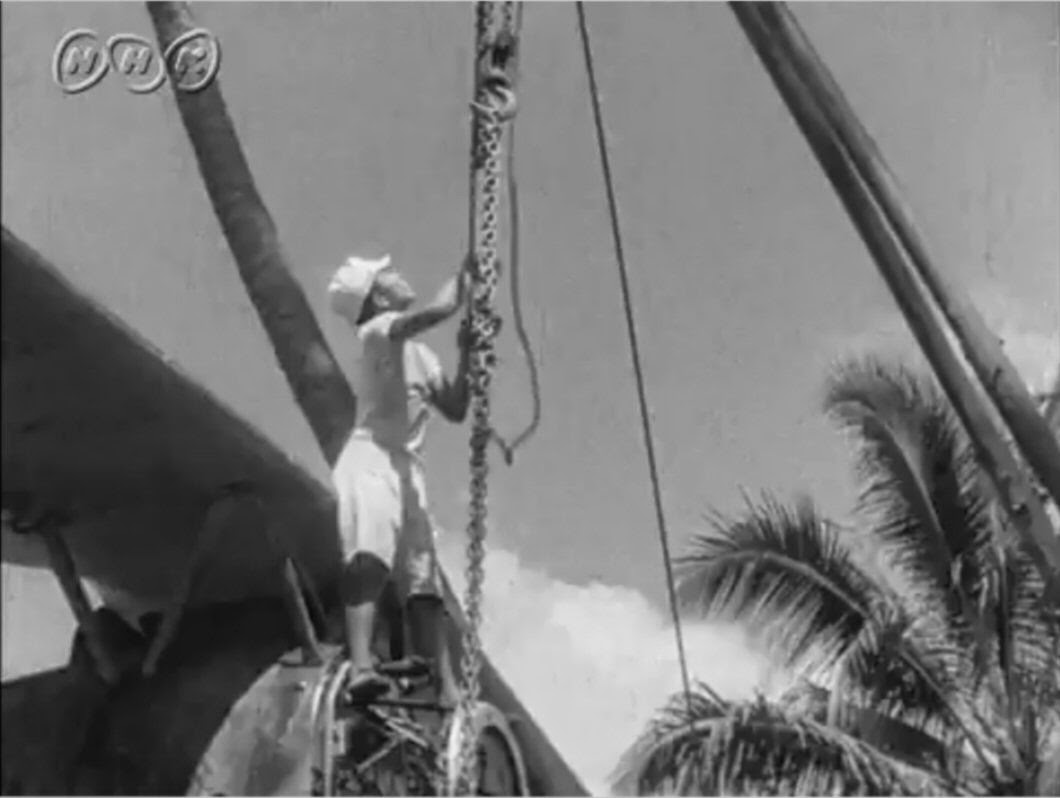 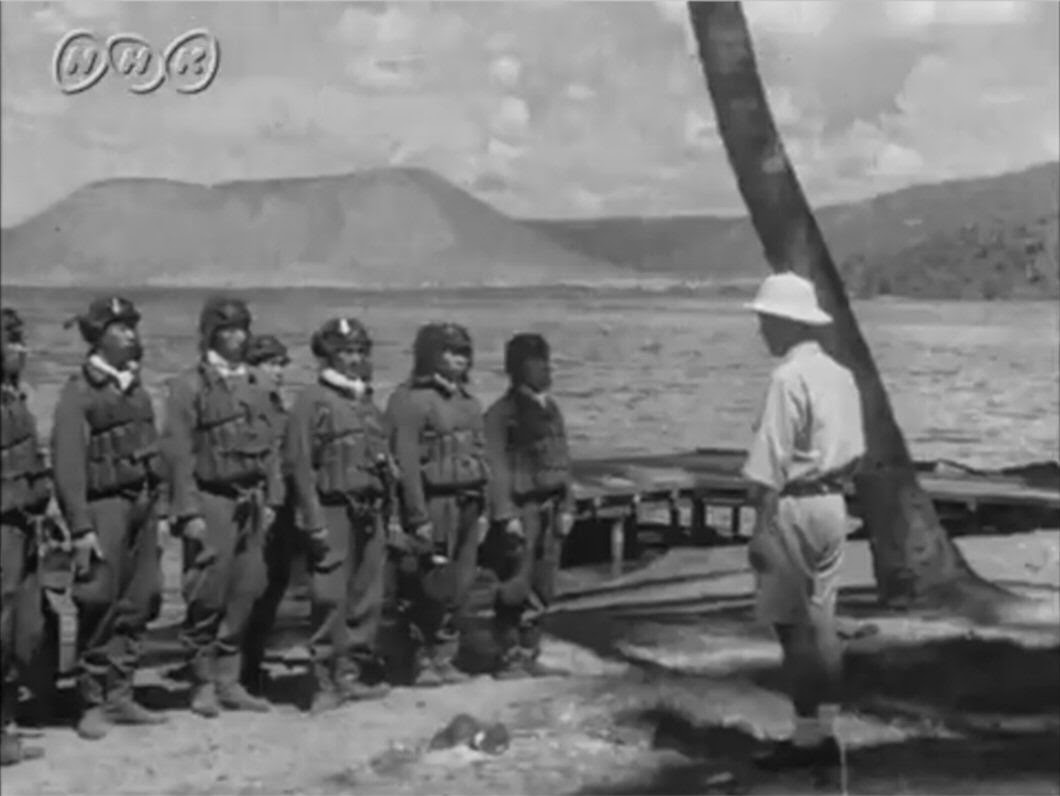 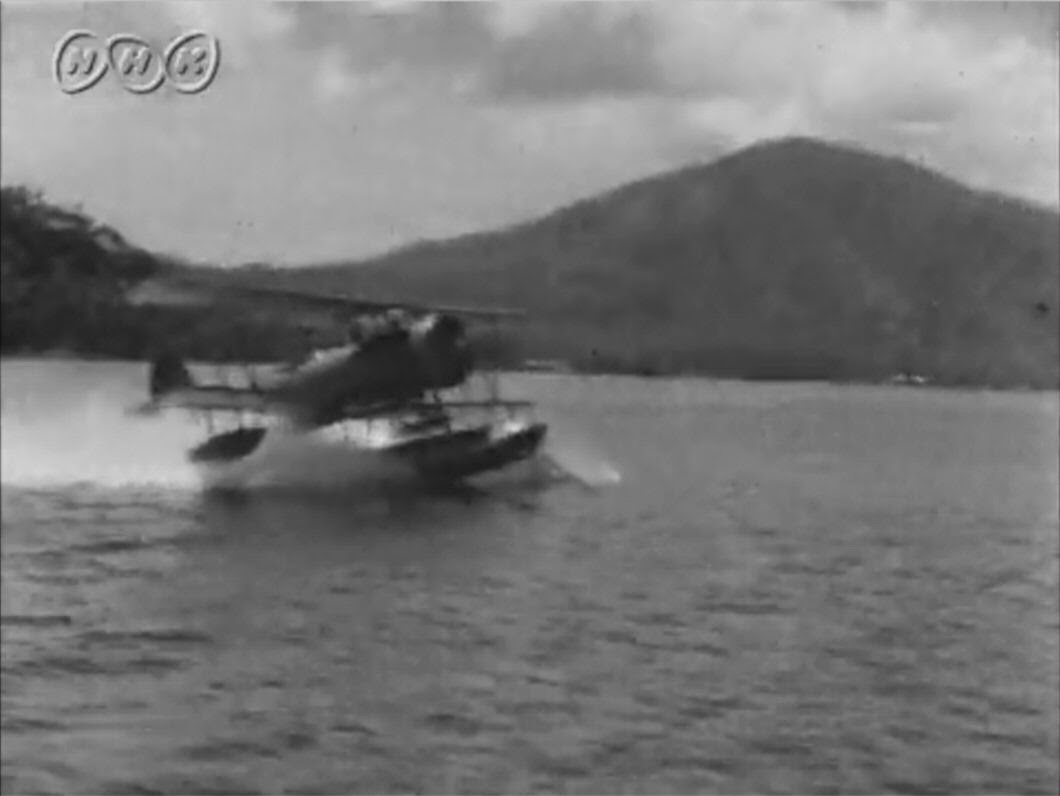 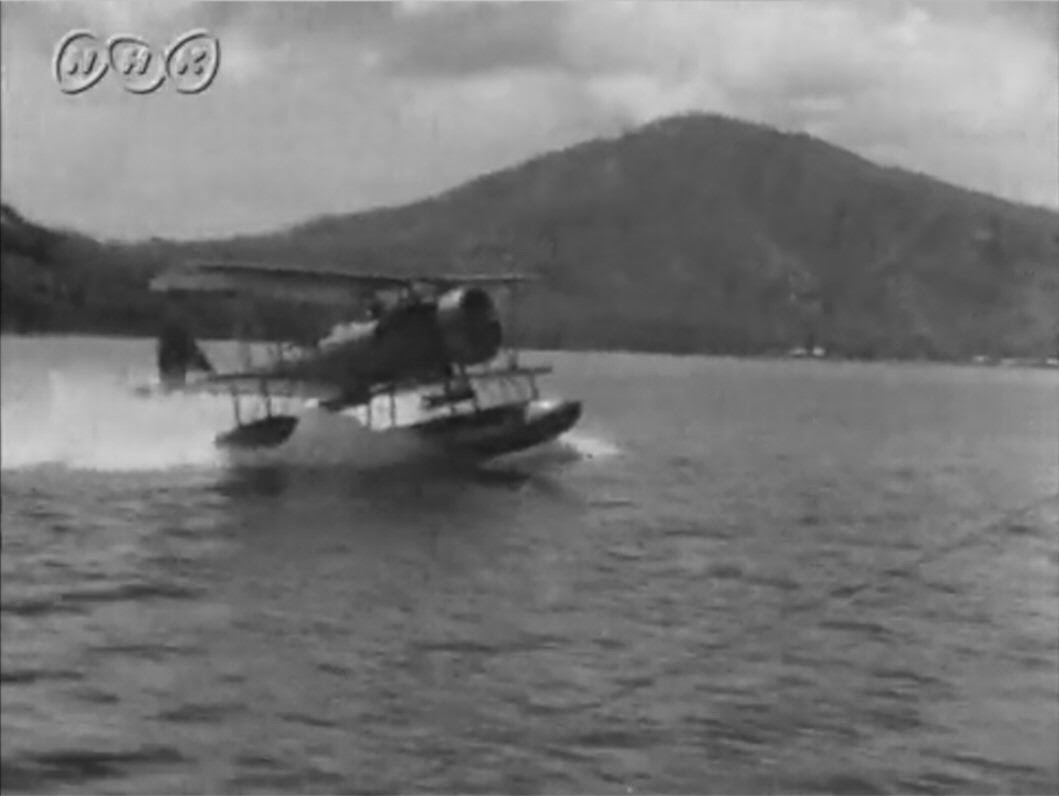 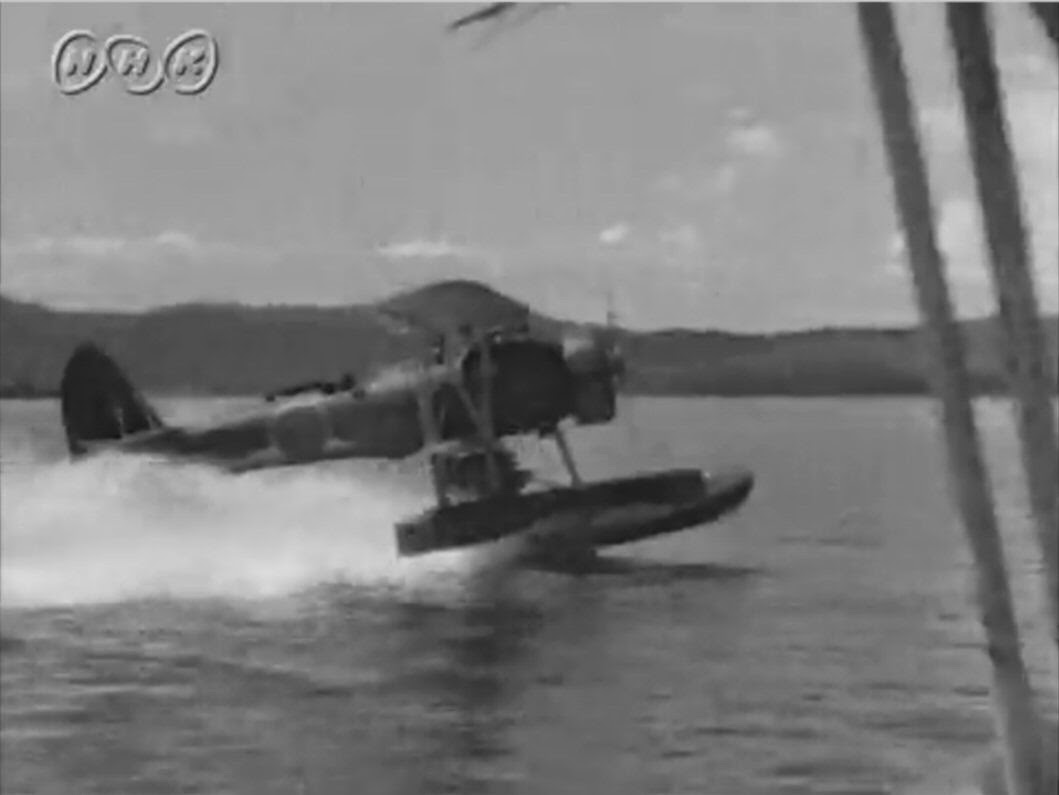 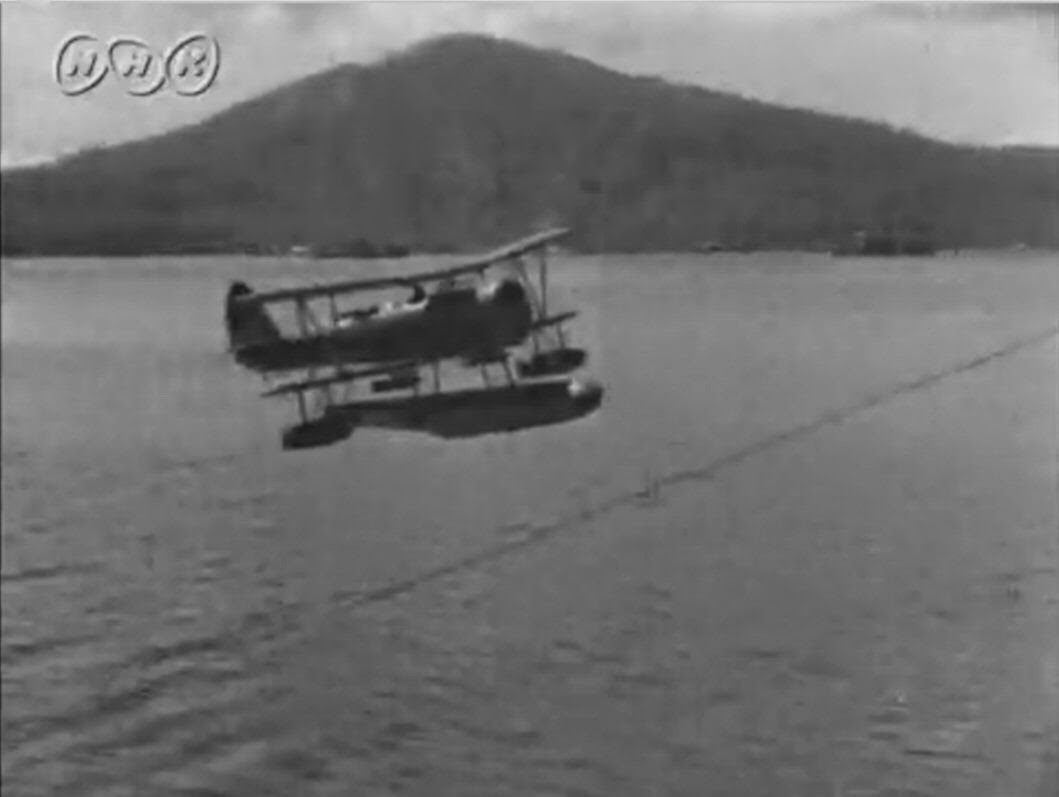 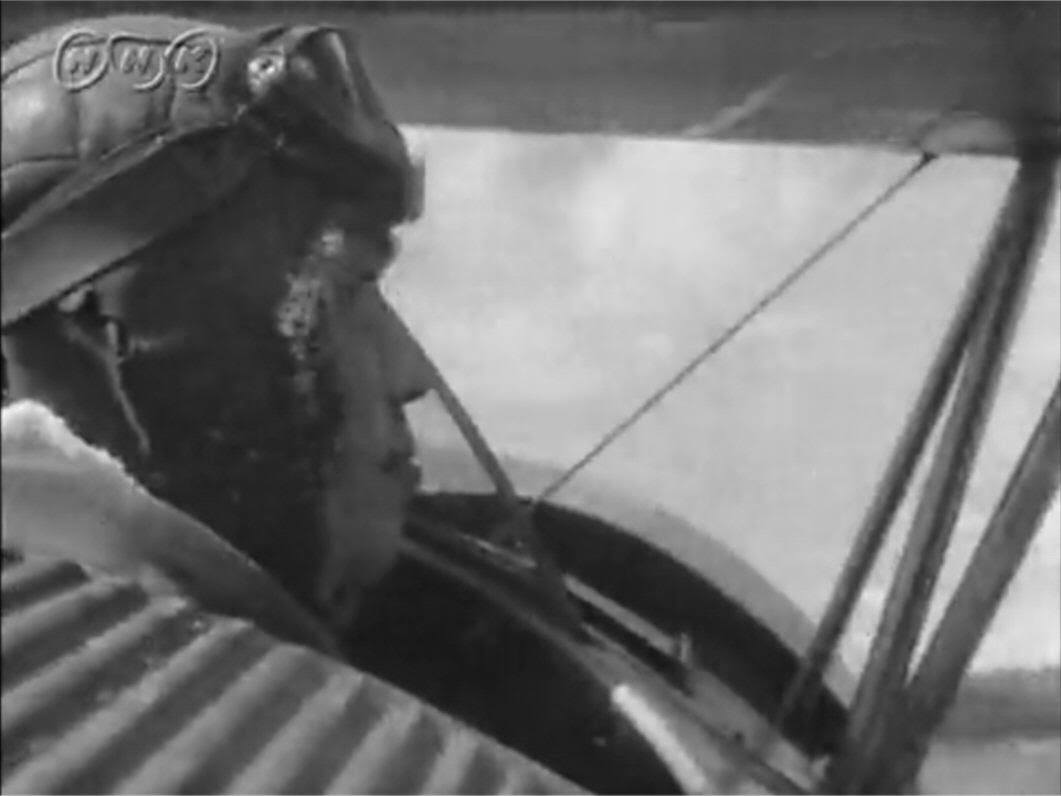 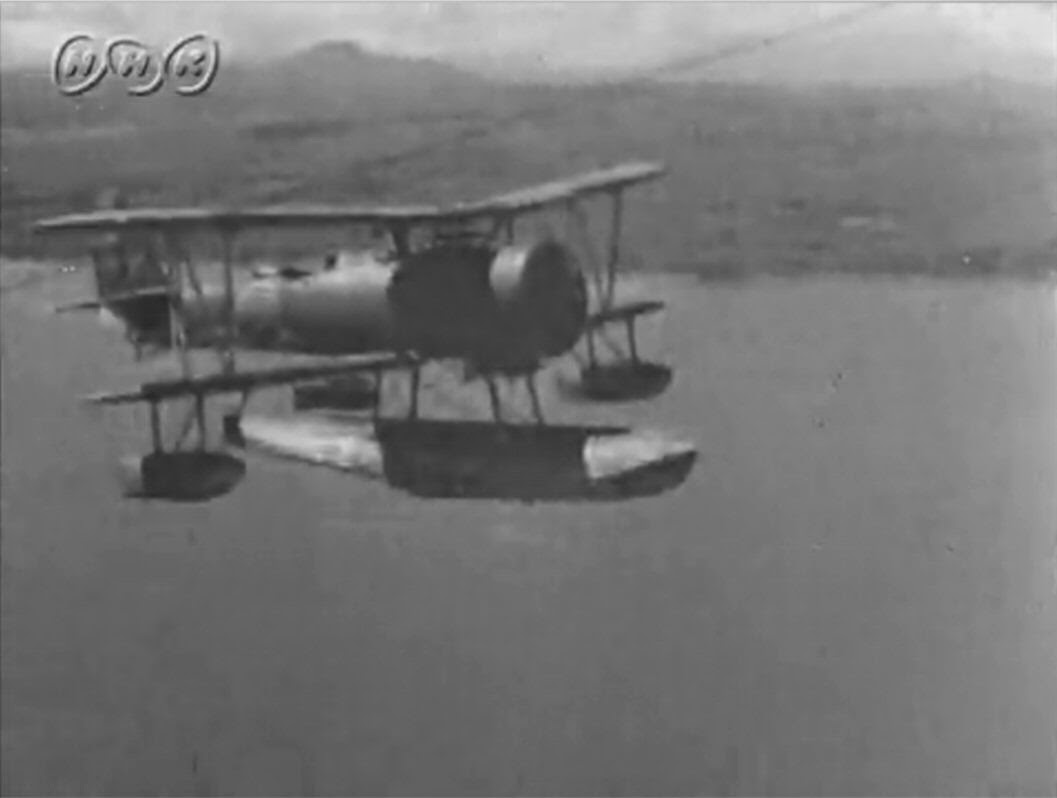 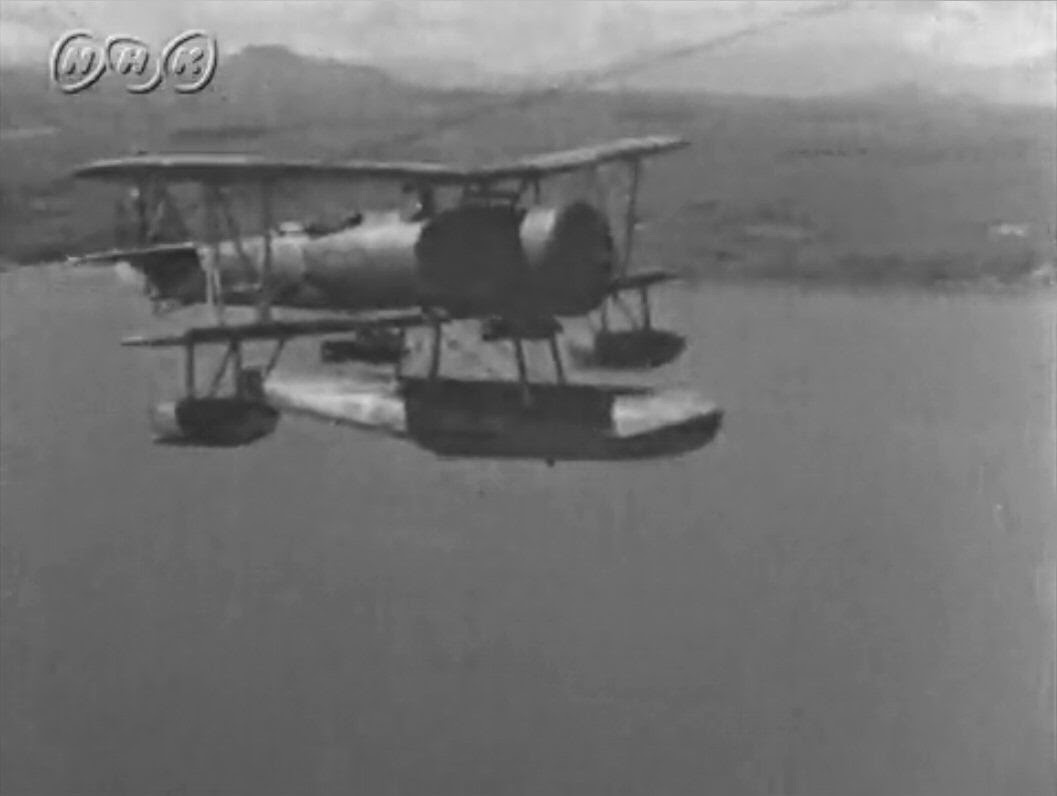 Wonderful images. Film is often a neglected source of information, perhaps because it takes time to go through an entire roll with the potential risk that it contains nothing of use. The IWM archive in London has some great footage that includes never-published markings and aircraft.

I've often wondered if the NHK collection (or any other Japanese film archives) might have footage from Singapore showing the "Buffalo graveyard" at Sembawang or other images of wrecked Allied aircraft.

Thank you for the great set of film stills. If in fact the Jake tail code is White R, then the ship would probably be the
Hijirikawa Maru 1941 to 1942 in the Wake Island, Rabaul, New Guinea area. What is more interesting is the markings on the rudder. Keep up the good work.
I enjoy your site.

Hi David.
I'm afraid there is no "Hijirikawa Maru". As we discussed before in a similar case this is the alternative reading of the kanji for "Kiyokawa Maru" which was the actual name of the ship.

The location is Malaguna Seaplane Base on the western side of Simpson Harbor, Rabaul. In the shot of the air crew lined up you can see one of the Rabaul volcanos in the background.

Very interesting photos. I would love to have a link to the video.