On June 5, 1937 an "Aviation Pageant" took place in Tokyo's Haneda airfield.
No less than 21 Type 95-3 Trainers or Tachikawa Ki-17s flew overhead forming in katakana "トーコーロ” （TO-KO-RO）, the first "letters of the Tokorozawa Aviation School they belonged to.

On the airfield a wonderful variation of civilian and military aircraft types as well as gliders were shown in front of the ecstatic crowd. In the foreground four Ki-17s can be seen lined up with most interesting tail markings consisting of hinomaru and different lines in red and white. In front of them from left to right is a Mitsubishi "Hinazuru" (Airspeed Envoy) registered J-BAOS belonging to Dai Nippon Koku (Great Japan Airlines); three different gliders, one primer, one secondary and one soarer; "Kamikaze" the famous Mitsubishi "Karigane" registered J-BAAI belonging to Asahi Shimbun; next is a Mitsubishi Type "Hato" based on the Army Type 92 Reconnaissance or Mitsubishi 2MR8 registered J-AARA (check HERE); a Nippi NH-1 "Hibari", the Japanese produced Pou-du-Ciel, of unknown registry; and in the background is another civilian Mitsubishi "Karigane" but although the register is not entirely clear it could be "Asakaze", J-BAAL.
Both photos are from a vintage publication. 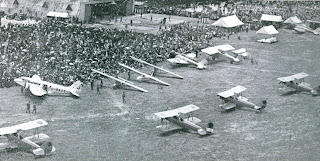