A photo today from a vintage publication featuring a Type 96 Carrier Dive-Bomber or Aichi D1A2 belonging to the 13th Kokutai as indicated by the letter "T" of the tail marking. The unit was organised on July 11, 1937 in Omura, Nagasaki Prefecture, with carrier fighters, bombers and "attackers". From August 7 of the same year until the end of the month together with the 12th Kokutai escorted ships to Dalian and then returned to Japan. On September 9 the unit relocated to Shanghai and was active during the attack against Nanking. After the fall of Nanking the unit relocated to the airport outside the city and participated in the attacks against Nanchang and Hankou. In March 1938 the unit was reorganised and was equipped with "field attackers", i.e. Mitsubishi G3M "Nell".
The heavily censored photo with the bombs and the background removed was featured in a 1938 magazine so it was probably taken during the attack against Nanking. Note the 3-colour top camouflage. 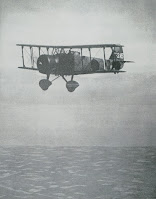