In 1932 the IJNAF purchased one Savoia-Marchetti S.62 from Italy to test it as a long range flying boat. In 1936 following completion of the Navy evaluation and testing, the flying boat was disposed to Nihon Koku Yuso Kenkyujo (Japan Aviation Transport Institute) receiving the civilian registration J-BBWI. It was remodelled and scheduled to participate in 1937, in the 15-year celebrations since the founding of the Kenkyujo by flying from Osaka to Thailand but the plan did not materialise. It was used in sea rescue and fish spotting.
Below a rather rare photo from a vintage, April 1937, publication with the flying boat in front of the Kenkyujo hangar. 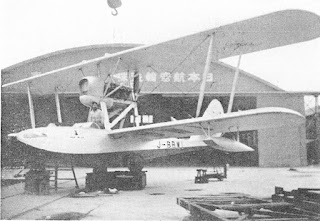 Hello,
from the picture it is a S62bis, a version with increased and rounded wingspan (16.66m), increased length (12.26m), and a new Isotta Fraschini ASSO 750 engine allowing a largely increased payload with roughly the same performance of the original S62.
Unfortunately I couldn't find any reference on this specific one in my books on SIAI.

There is a report on a Savoia S.62 use in Japanese Navy Air Force and eventually at Osaka
Japan Transportation Institute (as J-BBWI) on the book "Handbook of Japanese Aircrafts 1910-1945", published in 1989 by Model Art Co.Ltd. (in japanese language only).
In year Showa 7 (1932) one S.62 was acquired from Savoia-SIAI (former Società Idrovolanti Alta Italia) for research purpose by the Imperial Japanese Navy; interest was focused on the particular line of the kyle and on the long range of this seaplane;
this seaplane was tested from Showa 7 (1932) until Showa 11 (1936); during these five years this seaplane made
many long flights between air bases of IJN Yokosuka (Tokyo Bay) and Sasebo (Nagasaki Bay in Kyushu island); this S.62 eventually received civil registration
J-BBWI for use by the Japan Transportation Institute at Osaka. During civil service at Osaka S.62 performed well missions as aerial recon and photo, rescue on sea, search for fishing ships; a project for long range flight from Japan Kyushu to Thailand was scheduled,
but never realized; but this led to some modification on the aircraft, including more fuel
and upper wing enlargement; during one test the japanese press reported a record flight
duration of more 11 hours, and a climb at 4.200 meters, but these events are unconfirmed;
during the years of Japan-China war the japanese newspapers published sometimes many triumphal reports for propaganda duties.
The japanese book related data are ineteresting, because they say the engine of S.62 buyed from Savoia was Isotta-Fraschini Asso 500-RI (not Asso 750), a V-12 with 520HP;
wingspan 15 meters, lenght 11,70 meters, wing surface 65 m2, weight empty 2214 kg, weight full load 3260 kg, max speed 200 km/h, cruise speed 85 km/h, climb rate 2000 meters in 12'
and 3000 meters in 24', max range 1500 km, max duration flight 14 hours.
Luciano Gianfilippi (Daniel49)