Question for aircraft and owner identification

Mirek Kárník of Rising Decals from Czech Republic sent us the following photos and questions:


I would like to ask for help with identification of the two aircraft.

"J-APAE" is DH-82A, but who was its owner? I read, that it was Police in Dalian, Manchuria (China). Also, any ideas about the marking on the fuselage side?

The aircraft above looks like Ishikawajima R-5 "J-BAAG". Is it correct?

Answer:
1. According to THIS site the "J-APAE" is a DH-82A Tiger Moth and I can confirm that it belonged to the Kwantung Provincial police.
A more clear photo below from the Arawasi collection showing their two aircraft during the ceremony where they were delivered to the Kwantung Police. The DH-82A J-APAE is on the right possibly nicknamed "Hayabusa". The other aircraft is a DeHavilland DH83 Fox Moth possibly nicknamed "Shirataka" (white hawk); the vintage caption is not clear which nickname corresponded to each aircraft). I'm afraid I can't confirm the crash date. 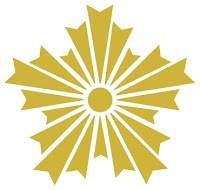 This marking called "Nisho" (rising sun) or "Asahikage" (the shadow of the morning sun) was officially adopted in 1882 and was based ofcourse on the rising sun. There were variations but the Kempei (military police) also had the same marking but with six main rays. As you can see it's yellow (golden).
In your photo there seems to be some more small markings on the tail. I'm not sure what these could be.
Below, although not aircraft related, a couple more photos, from the Arawasi collection, of the Kwantung Police showing their uniforms. 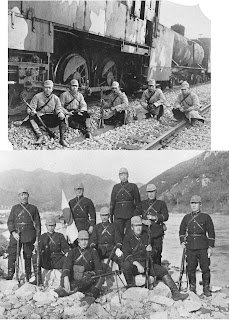 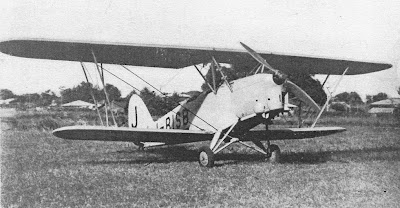 Thank you Mirek for sharing these very interesting photos with our blog.
Extensive detailed coverage on Tiger Moths and Fox Moths in various Air Britain Archive Historical Quarterly magazines confirms the Tiger Moth as J-APAE Hayabusa, written off after a crash in June 1935, and the Fox Moth as J-APBE Shirato. The Fox Moth was photographed in May 1933 with a canopy fitted over the pilot’s cockpit and changes to the cabin door; from February 1937 to May 1939 it was transferred to the Financial Section of the Administration Department, but its eventual fate is unknown.
Peter Starkings
Posted by Arawasi

This is very interesting, since I have had my eye on the Tiger Moth for some time as the possible subject of a model. Any idaes as to what the colour scheme might have been?
Derek Cooper

Silver or "gray-green". Considering the date I would go for silver overall.