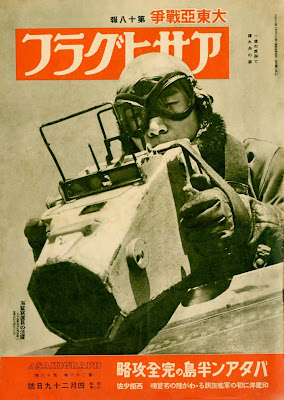 The cover of the April 29, 1942 issue of "Asahi Graph" features a "navy eagle" taking photos with his hand held aerial camera commonly known in the IJNAF as "Nedinsco".
From HERE we read:

The first aerial camera used by the Japanese air forces in some quantity was the Nedinsco FK I. (Nedinsco was a Dutch branch of Carl Zeiss, and "FK" perhaps means Fliegerkamera.) It was adopted by the Japanese Army as the 25cm Aerial Camera (二十五糎航空写真機), named after its 25cm focal length. It was also used by the Navy as the Handheld Aerial Camera 25cm (手持式航空写真機二五糎).
The Nedinsco camera was later produced in Japan by Rokuoh-sha, perhaps after an official license was bought or as an unauthorized copy. Cameras made in the 1930s have a Hexar Ser.1 25cm f/4.5 lens. They were mostly retired from use when the Pacific War broke out.
The camera takes 13×18cm film plates. The rigid body is made of wood, with a characteristic octagonal front section, covered by a cap. There is a built-in grip on the left and a separate wooden handle on the right.
The focal-plane shutter is a separate unit, which can be slid out of the body for maintenance or repair. It has vertically travelling curtains, and the range of speeds is 1/90, 1/180, 1/375 and 1/750.
The aperture is set by an index at the top of the camera, in front of the identification plate, with f/4.5, f/6.3 and f/9 positions. There is an articulated mechanism placed around the lens, holding two filters controlled by external knobs on either side of the body.

We can add to the above that the rigid body was made of mahogany, the interior was covered by a black wool cloth while outside was covered with linen with waterproof paint applied. All this was done to protect the camera and the lenses.
A yellow glass filter was used to cut the blue and purple colour of the highly sensitive film. The camera could store six glass plates and as can be seen from the photos featured below remained in use but for training purposes. 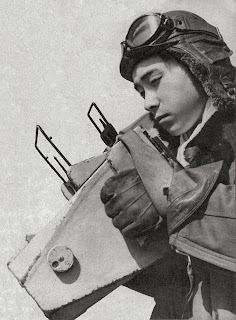 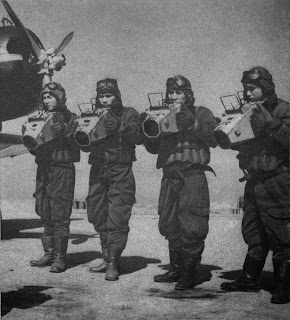 THIS link has some brilliant explanatory photos of a real sample:
The glass plates were made by Fuji.
Below is a Fuji ad of that era. Note the Nedinsco camera. 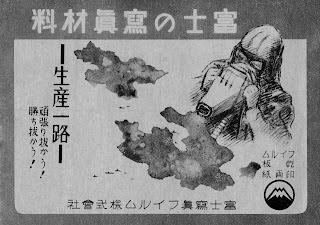