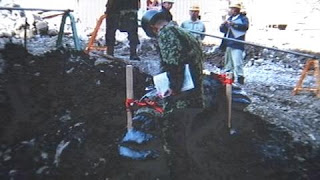 A bomb that was found in Hitachi city, Ibaraki Prefecture on December 6 at a Hitachi company factory during construction work, was successfully defused this morning by JSDF. The bomb was believed to have be dropped by US forces around the end of the War and weighed about one ton. 1,600 people were evacuated as a precaution.
Check this link for a video.
Posted by Arawasi