Kamikaze-Go getting fuelled up. Notice the beautiful and clean lines. 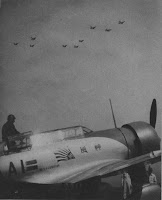 April 1, 1937. Ceremony before departure. A formation of Shonan HikoHei (Youth Aviators) is flying overhead to wish good luck to the the Kamikaze-Go pilots.

April 2. Took-off from Tachikawa airfield at 1:44:14am and flew until South Kyushu. Unfortunately encountered bad weather and returned to Tachikawa at 8:50.

April 7. Taking off from Culcutta. 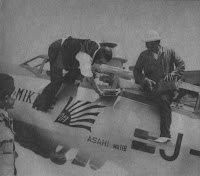 April 8. Arrival at Baghdat airport. The pilots are getting off holding their flight diaries and passports.

April 16. Croydon airfield. Getting ready for take-off for the European tour after resting in the UK for a week.

June 5, 1937. An aviation pageant took place in Haneda airport from 10:00am sponsored by the Ministry of Communication, the Imperial Aviation Association and Asahi Shimbun. More than 100,000(!) visitors had the chance to see up close 160 IJAAF, IJNAF and civilian aircraft (wish I was there...). In the photo Prince Mikasanomiya (the oldest living member of the Imperial family) is shown the cockpit of Kamikaze-Go by pilot Iinuma. Other Imperial family members visiting the event were Princess Fusako and Princess Masako, daughters of Emperor Meiji. 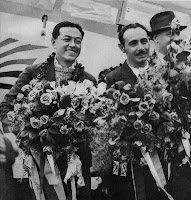 Check HERE for more information about the flight.

Thanks for this fine selection of photos. I look forward to the rest of this series!