A line-up of Type 2 Fighter Trainers or Mitsubishi A5M4-K, the trainer version of "Claude", getting ready for take-off. Unit unknown but maybe Oita Ku. 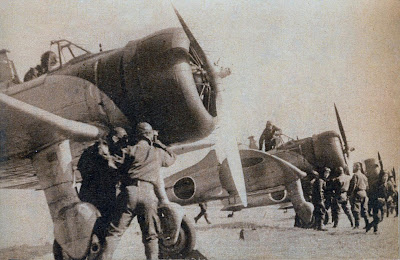 Below is a series of very interesting captions from a short film from Critical Past, HERE, shot at Omura airfield in Nagasaki Prefecture after the end of the War. Omura Ku was one of the units that flew the A5M4-K and considering that only 20 "Claude" trainers were ever produced then just to see a number of aircraft of this type in one base and in one clip is something really exciting. Not to mention we get some intriguing hints on the overall color of IJNAF trainers. 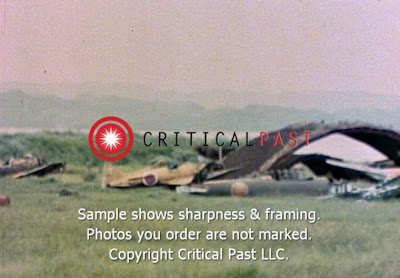 Unfortunately in this caption the tail marking of the overall orange-yellow A5M4-K is not discernible but Omura Ku used the katakana "オ" (O) for their tail marking. Note the overall color. Any ideas about the aircraft type on the ground in front of the trainer? 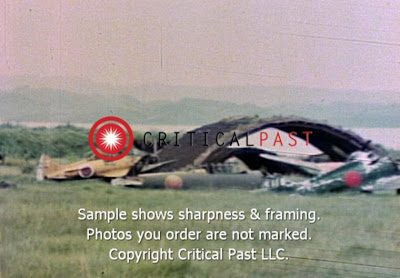 In this caption a "Claude" fighter is visible on the right side of the caption. It's tail marking seems to have four digits, possibly "オ116". Compare the overall green of the "Claude" with the green of the aircraft next to it on the left. 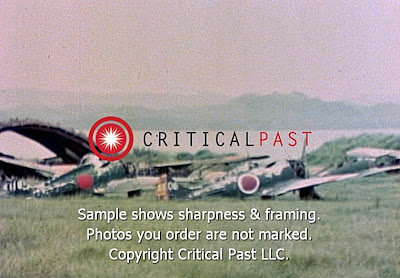 Next to the "Claude" in the above caption is another A5M fighter but with what looks like an orange replacement rudder from a trainer and a tail number "??06". Both fighters have suffered a lot of weathering and no signs of red-brown primer are visible under the top color. 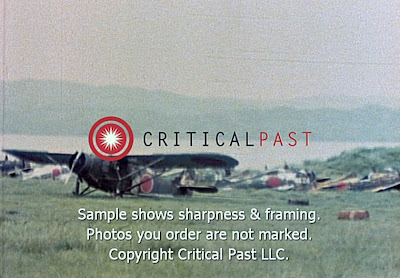 On the left side of the entaigo (the concrete shelter) and before moving to the right in the above captions, some more interesting aircraft are visible. In the foreground is a Type 90 Crew-Trainer or Mitsubishi K3M1 "Pine". It has green upper surfaces but if you look closely you will notice orange on the tail and, even more interestingly, the fuselage hinomaru surround looks also to be orange. Notice the yellow IFF stripe on the wing edge but surprisingly the wing undersurfaces look to be gray. So we can conclude that the fuselage overall color was originally trainer orange and was overpainted with green but what about the wing?
Behind the mysterious "Pine", to the right side of the caption, is another A5M4-K. This one has been haphazardly camouflaged with green paint and the tail marking from what we can make out appears to be "?124"; the first digit could be "オ". Note that the tail marking is applied parallel to the ground not the plane's centerline and that it's also in white suggesting that it was applied at a later date after the green camouflage.
Don't forget to check the movie in the link above and as always feel free to comment.
Posted by Arawasi