Ensign Miyazaki Isamu was an ace of the IJNAF that fought in most South Pacific theatres including Rabaul, Guadalcanal, the Solomons and New Guinea where he flew Zero-sen. From 1945, Miyazaki-san was assigned to the Sento (fighter) Hikotai 301 of the famous 343 Air Group flying the latest Navy fighter; Kawanishi N1K2-J Shiden-kai. 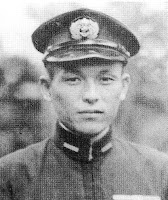 His autobiography entitled "Kaete kita Shiden-kai" (the Shiden-kai that came back) was released by Kojinsha in June 1993 and is full of vivid descriptions of all his War experiences. 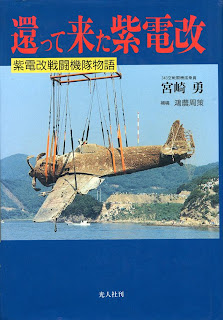 A small extract from the chapter "saigo no shutsugeki" (the last sortie) details the very last time he flew during the War and more.
On August 12, 1945 Miyazaki-san took off with three other pilots on a patrol mission over Yakushima with himself being the flight leader. On the way back while flying at a height of 1,000m over the city of Karatsu the Japanese pilots started receiving heavy anti-aircraft fire from the nearby IJArmy base. Perhaps the Shiden-kai were mistaken with US Grumman F6F and to their bad luck the gunners on that day were particularly accurate. The pilot of the third aircraft Okimoto was shot and had to make a belly landing on a field near the seashore while the pilot of the fourth aircraft, Izawa, crashed in the sea.
Miyazaki-san's plane was also hit and due to the heavy shock the aircraft sustained, one of the legs deployed forcing him to land with only one leg down at Ganosu airfield where he lost consciousness during the impact. When he recovered he was furious and immediately called the IJArmy headquarters of the Western Area. His words "This is the Navy 343ku and you shot us down. The place is...Send here immediately the person responsible for this." must have certainly hit the target because eventually an Army Major arrived and apologised profusely. Fortunately both Navy pilots were rescued but Izawa suffered serious injuries and had to be taken to the hospital.
That was Miyazaki-san's last flight of the War but it wasn't the first time Navy Shiden-kai were mistaken for enemy aircraft. During a kamikaze escort flight over Kikaijima an IJAAF aircraft was spotted approaching with his guns blazing. The Navy pilots thought "what the heck is he doing? Is he shooting at us?" So around April-June 1945 a Zero 52, a Shiden and a Shiden-kai flown by members of the 301 went to the tokotai base of Chiran to give the Army pilots a chance to see the Navy aircraft from up close and explain the tactics the IJNAF used against US aircraft.

Arawasi had the privilage to meet Miyazaki-san on a number of occasions during the annual meetings of the "Kansai Rei-sen Tojoin-kai" (Kansai Zero Pilot's Association). We had the chance to relish the long conversations with a veteran in his 90s with a clear state of mind, remembering every small detail about either the Zero or the Shiden-kai, enjoying his beer and smoking like a chimney. Unforgettable will remain the moments when we heard all the veterans singing Navy songs on the first meeting after the death of Tanimizu-san.﻿﻿ ﻿﻿Miyazaki-san passed away in 2012. He will be sorely missed.
Posted by Arawasi

Since Arawasi has visited with members of Kansai Rei-sen Tojoin-kai, one hopes there will be some in depth pieces on IJNAF Ensign Miyazaki Isamu and others. Good start. We want more.

It would be interesting to get details of the everyday life of forward base pilots in addition to the sorties.