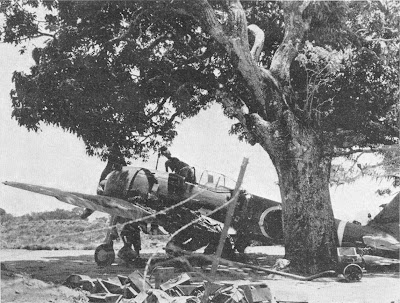 As you can see from the tail marking this Nakajima Ki-43 "Hayabusa" belongs to the famous 64th Sentai but the vintage caption doesn't offer any useful information. The dark arrow suggests that it belongs to the 2nd Chutai with red tail marking and white surround. The lack of white surround in the photo though suggests that it might belong to the 3rd Chutai with yellow arrow and a red or yellow surround, just that in the photo the yellow looks dark under the shade. I'm leaning towards the 2nd Chutai.
The unit participated in the defence of Rangoon in April and May 1943. On May 21-22 attacked Chittagong and Cox's Bazar. An Australian newspaper of the time (Nambour Chronicle and North Coast Advertiser) reported:
"Japanese planes have raided the Indian port of Chittagong, near the Burma border, which Rome radio claims the British are evacuating. The Japanese used 20 bombers escorted by fighters. British shot down four bombers and three fighters, and damaged six other planes."
Due to the rainy season the 64th withdrew for training and recuperation. From June 1943 the 1st Chutai was in Mingaladon airport of Rangoon/Burma, the 2nd Chutai was in Palembang and the 3rd Chutai in Sungai Petani. Therefore the above photo was taken either in Palembang or in Sungai Petani.
I hope you find the photo inspirational for a diorama
Posted by Arawasi