Around 1941 the magazine "Koku Asahi" organised an essay competition to celebrate the release of the first issue of the magazine. The subject was simply "Aviation" and students from Junior high, high school and universities could participate. The price was one glider for each school of the winners of the three categories.
In April 1941 the results were announced, no less than 733 essays were submitted, 697 of them from Junior high schools. The winner in this category was Kawamura Riuchi one of the 120 members of the glider club of his Sanbongi Nogyo (agriculture) Gakko school of Aomori prefecture.
The prize award ceremony was held on April 29, the chief editor of "Koku Asahi" was present with all 500 students and teachers of the school as well as hundreds of female students from near-by girl-schools and about 2,000 residents of the area. The ceremony started at 11:00 and from midday two glider pilots made demonstration flights for the pleasure of the spectators who had never seen gliders in flight before. The two pilots stayed for two more days to train students.
The glider presented to Kawamura-kun was a very colourful Maeda "Komadori".
The photos below are from the prize award ceremony. 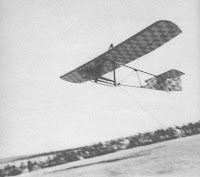 Note the logo of the magazine "Koku Asahi" on the tail. 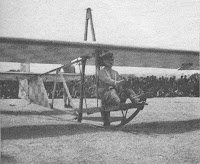 Our good friend Zygmunt  Szeremeta created artwork especially for our blog.
The full registration number is not visible in the photos, therefore the "B-83" is only a suggestion.

The "Komadori" (robin) was designed by Maeda Koken Kogyo and first took to the air in October 1940. It was designated Maeda Model 105kai but also Asahi-shiki "Komadori" primary glider. Maeda built about 1200 of this very successful glider but unknown numbers were also built under license by other manufacturers and even schools.
Until the introduction of Maeda 105kai it took about an hour to assemble a primary glider; "Komadori" took only five minutes. It had shock absorber and the main wing and the fuselage could fold making it especially easy to store. It was so light that it could be transported by a bicycle-drawn cart.

Interesting, it reminds me of a modern ultralight aircraft. simple, functional, and the pilot being very much out in the breeze.
Zygmunt's artwork, as always, is very well done!