A photo from a May 1940 magazine featuring railway minister of the time Matsuno Tsuruhei (1883-1962) visiting the troops at the North China front.
A rather obscure politician who served as railway minister for only seven months with the government of admiral Yonai Mitsumasa.
In the photo he is seen leaving Haneda with a DC-3 bearing the registration J-BDOK belonging to the Dai Nippon Koku. This particular plane was named "Katsura". Cercidiphyllum is the scientific name of the Japanese plants commonly known as "katsura" (nothing to do with laurel). 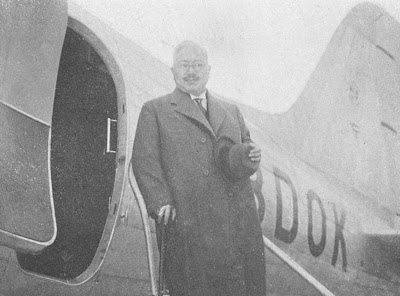