Bob Alford sent us the following heads-up:
"Ki-43 found in Pathum Thani close to where a USAAF P-51 was located a couple of years ago - close to Don Muang airport which was used during WWII. 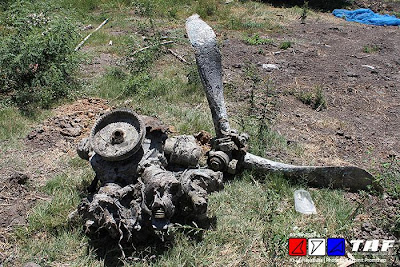 And the following from Thai Aviation History (site here)
"The wreck of a Ki-43 has been found in Moo 6, Tambon Rahaeng, Lat Lum Kaeo
district, Pathum Thani, about 25km northwest of Don Mueang Airport. The wreck was found in May 2013 during excavations for a new housing development.
Details not yet known, but reports suggest a mid-air collision between two aircraft, with both pilots bailing out. At least one of the pilots is reported not to have been a Thai speaker, which may suggest that the Ki-43 was Japanese, not Thai.
The parts recovered by RTAFM include the prop, engine, wing centre section, and
cockpit area, along with one main gear with tyre and tube."
Check the two links for more photos.
Thanks a lot Bob!
Posted by Arawasi