Very tired today after spending five hours at the National Diet Library of Tokyo, battered by very strong winds and quite cold weather. So a rather short posting today mainly with photos and whatever information we could gather. We promise to keep on searching for more.
First up is a set of excellent photos of a Kirigamine/Nippon "Taka" (Hawk) 1 soarer glider registered J-BADL. The marking behind the pilot is that of the Imperial Aeronautical Association but the very interesting tail marking eludes us for the moment. Markings of glider schools in Japan is field not researched by anyone AFAIK therefore it is very difficult to pinpoint which marking belonged to which school. 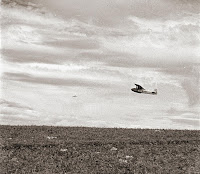 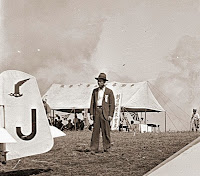 The writing on the tent is not very visible but it mentions that it belongs to a high-school. The sign in front says that this is a VIP area for Asahi Shimbun.
A different photo in the collection is of a glider belonging to Asahi Shimbun.

There is no list of the gliders belonging to the newspaper (if in fact there were more than one) but the one known is called "Asahi Type soarer Model 1" shown below. It was completed and test flown for the first time on May 25, 1935 in Haneda airport. The test pilot was Kawauchi Kazuhiko and in my eyes bears a resemblance to the pilot in the above photo. Clearly there is a difference in the shape and size of the nose, not of the two pilots but of the two gliders but the rest of the visible details, cockpit shape etc, are very similar. Perhaps a Type 2 or a modification after an accident? 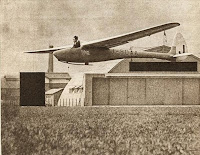