Below are photos of my Nichimo Nakajima B5N2 "Kate" in 1/48. At long last, today I got 5 minutes of sunshine to take these photos after waiting for two weeks suffering from typhoons, constant rain and strong wings. I hope the careful wash is visible. The kit is pretty straightforward without any surprises and good fit. It looks a bit weird from various angles but I didn't care to make any improvements when I have much better "Kate" Hasegawa kits in stock. I used MrColor paints. 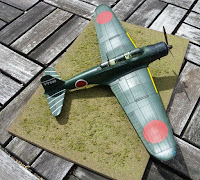 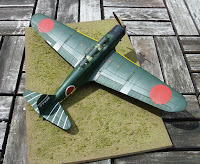 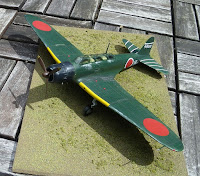 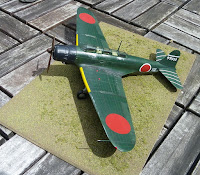 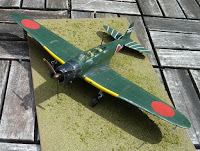 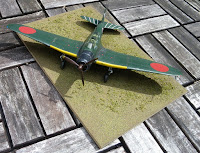 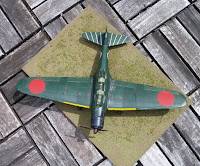 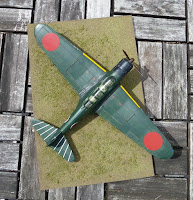 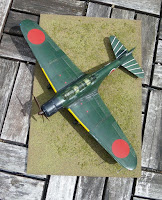 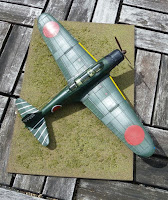 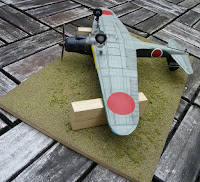 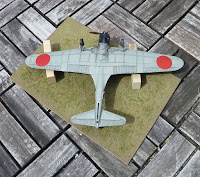 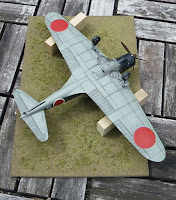 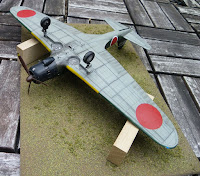 Now for the markings and other details of which I paid more attention.
The Create 301 (Aeromaster?) "Special Attack Squadrons" (1996) decal sheet gives decals for "USA353" but I could not find any photos of this particular aircraft, artwork of which is included in Model Art#458 (below).

On page 94 of MA3458 a photo of another "Kate" is featured belonging to the same kamikaze unit that was damaged in an accident during training. The tail marking is "USA 339" (not "393" as the caption says) and this aircraft became the subject of my model. There are relatively few late-war "Kate" photos with green top camouflage and in general the aircraft in the few photos show various irregular patterns making particularly difficult to extract safe conclusions. Let's start with the IFF stripes. Nichimo, Hasegawa and most illustrations show the IFF stripes of green "Kates" to be very thick. This is based on the photos of the captured KEB-306 "Kate" (FAOW #32, p.66-67) and others. Other aircraft seem to have very very weathered IFF stripes. On p.73 of "Tatakau Umiwashi", top, there is a photo of an UsaKu "Kate that shows the IFF stripes to be very thin and this is what I followed for my model. In the same photo the aircraft has a brown propeller with two thin white stripes. In this photo a small number is visible under the cowling lip, common practise with the "Kates" that had the last digit of their tail number repeated on the cowling and on the wheel covers. All these were shown in the model. There is also the issue of the anti-glare area. The decal and MA#458 artwork shows no anti-glare but MA#553 shows all "Kates" with anti-glare. Careful inspection of the "USA339" photo shows the fore part of the fuselage to be darker and more shiny than the rest, so I concluded that it could be black. MA#339 also says that late-war green "Kates" had white lines on the horizontal stabiliser but not reaching the elevators. A photo of another UsaKu "Kate" on MA#458, p.94, shows that this not the case.
And last but not least, very careful inspection of the "USA339" photo revealed "something" white right behind the fuselage hinomaru and I concluded that it was an id plate. Note that the aircraft in the photo has very little weathering and since it was damaged during training I didn't hung any bomb.
For the decals I used the Create301 set (the port hinomaru and my nerves cracked under pressure; c-est la vie, non?) and a spare Hasegawa "Kate" decal set.
A few words about the unit.
According to the Create301 decal set for the "USA353":
"Type 97 Kate Type III, "Hachiman-Shinchuu-tai", from Usa Kokutai, flown by Ensign Masanori Oishi (from Shiga), with crew members Ensign Yoshikazu Shimizu (from Tokyo) and NAP 2/C Kentaro Inudo (from Kagoshima), April 18, 1945, Kushira Air Base/Kagoshima Prefecture. This unit was organized in March 1945 by the carrier attack units of the Usa Kokutai under the 10th Air Fleet command. Officially named "Hachiman-Gokou-tai", the unit moved to Kushira Air Base/Kagoshima Prefecture on April 1. On April 6, 13 Kates led by Lt. Yamamoto of the 1st Gokoku-Shirasagi-tai attacked U.S. Navy forces near Okinawa. On April 18, the 10th Air Fleet was separated from the command of the 5th Air Fleet to form the "Hachiman-tai". Ensign Oishi piloted one of two Kates that attacked ships near Naha, Okinawa on April 28."
In most respects the above information agrees with MA#458 which mentions that the the “Hachiman Go-o” unit was organized in March 1945 with carrier attacker and carrier bomber graduates from Usa Kokutai. On April 1, commander of the carrier attack unit became Lieutenant Yamashita Hiroshi. On April 3 Yamashita wrapped a hinomaru flag around his waist, got in the observer’s seat of “Kate” “USA-322” and waving a huge flag of the unit led 15 aircraft to Kushira base in Kagoshima prefecture. On April 6, 13 of these aircraft, including Yamashita, took off from Kushira base and attacked enemy ships around Okinawa. From April 4 until April 6 three more “Hachiman Go-o” units were organized. On April 12 the second unit with nine aircraft and on the 16th the third unit with two aircraft attacked enemy ships.
MA#458 on p. 180 has a list of the crew members of 14 (?) "Kates" belonging to the 1st  “Hachiman Go-o” unit that attacked on April 6 and on page 183 has a list of the crews of 13 "Kates" belonging to the 1st "Go-o Shirashagi" unit that also attacked on April 6. The 1st  “Hachiman Go-o” unit members were from UsaKu, the 1st "Go-o Shirashagi" unit members were from HimejiKu. So it seems that the decal set caption mixes the two units.
The “Hachiman Go-o” unit took it's name from this shrine dedicated to Hachiman-jin. The "Go-o" part of the unit's name is related to another shrine called "Go-o Jinja" located near the above mentioned one dedicated to this guy. For the Kushira base check here.
Posted by Arawasi

Very nice work on an older Nichimo kit. Finish looks very good to me. Thanks for sharing.

Looks really good to me! The finish is nice and smooth, and the weathering seems spot on. I'm one that doesn't like a heavy wash or patchwork effect that some techniques render, so the wash looks just right to me.
Very cool!

Great model, George. I like the underside most (yes, a little more weathering). The drift lines on the tail appear a bit thick. The Kate is a very lovely model, even the Nichimo!

Thank you all for the comments. Glad you like the model. The drift lines are from Hasegawa and look quite okay to me comparing with the real ones.