Another model I recently finished for this contest. Although it needs a couple of hours of extra work to bring it to a more satisfactory level I decided to take photos during the few minutes of sunshine we had today.
Tamiya "Dinah" in 1/48 oob with MrColor paints as usual. Tail markings and fuselage hinomaru are from Tamiya. Wing hinomaru were from Tamiya but were destroyed when I applied "Tamiya Mark Fit" (3rd or 4th time this shitty stuff destroyed the decals) and used spare Arawasi decals from the "Hayabusa" set; they ended up slightly larger than they should have been. The bomb is from the Nichimo "Kate" kit with Tamiya "Hayate" bomb attachments. Seat belts from Fine Molds.
The kit had a very nice and smooth fit and was an overall very easy built.
The "Shitei Shimbutai" ("Shitei" - "Shireibu Teishatsuki" - Command Reconnaissance) a.k.a. "Shimbu Sakura Tokubetsu Kogekitai" was organized on March 4, 1945 in Tokyo's Chofu airfield with 14 members and seven "Dinah" Ki-46-II & Ki-46-III armed with 800kg or 500kg bombs. It belonged to the 6th Air Army and after moving to Mushiroda Airfield, Fukuoka Prefecture, on April 7 advanced to the Navy's Kanoya base. On that day commander of the unit, 2Lt Takenaka Takao with observer Sgt Yoshiwara Shigehatsu took off at 13:00 on a "Dinah" Model 3 armed with an 800kg bomb and attacked enemy ships in the Okinawa area at 14:40. At the same time a Yokosuka "Suisei" belonging to the 131Ku with tail marking "131-34", assigned to observe the results of the mission also perished in a suicide attack.
On April 12, 2Lt Higashida Kazuo and Sgt Nakazawa Tadahiko perished in a suicide attack followed on March 14 by 2Lt Furuyama Hiroshi with Sgt Atsuta Toshio and 2Lt Yamaji Minoru with Corporal Keimasu Zeiichi. Finally on March 23 Sgt Morikawa Fujio didn't return from a reconnaissance mission over Okinawa.
No matter how much I searched I could find no reference to any IJAAF 800kg bomb so I concluded that the "Dinah" used Navy bombs; note that they operated from a Navy base. There is only one photo of this particular aircraft showing very little details. In artwork it is usually depicted as overall "brown" but I opted for the dark green usually associated with tokko planes. Tamiya gives iff stripe decals I found too thick and too prominent. So I painted narrower ones. I might have made a mistake with spinners. The plane probably needs the ones with the starter attachments. Again, no details of this particular plane are known, so... 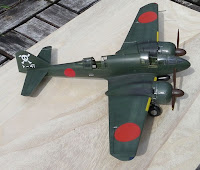 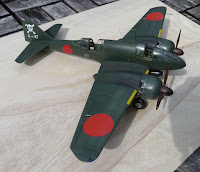 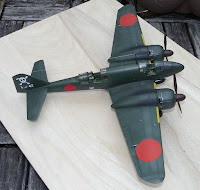 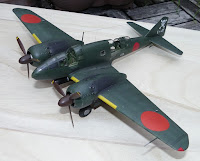 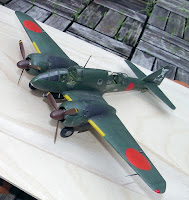 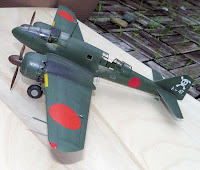 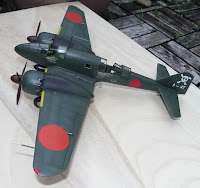 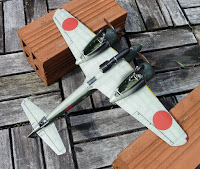 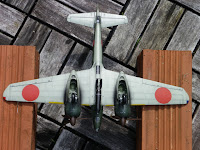 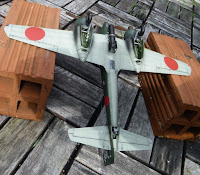 That's absolutelly brillliant work. I like especially the fine chipping and black smoke behind the exhausts.
Clean canopies without cement part. Impossible for me.
Yeah, thats 10.

I LIKE IT!! It really looks good, paint, weathering, chipping come across very well in the photos. Although I can't give a reason why, I like the effect of the wood panel being used as a temporary base. The tail marking and the huge bomb make it all the more interesting.

Good work as always. Were you able to use any of Michael Thurow's techniques for antenna rigging? If not it still looks great.
How do you like Mr. Color paints? I tried to buy their aotake paint via Amazon but it never arrived. So got Testors Model Master version of the same color. I don't like it but it's all I have. I do like Model Master paints overall it's just this particular one doesn't seem right to me.

No I didn't because the model had progressed too much.
Mr.Color paints are absolutely the best.