On February 24, 1939, 117 members of the House of Peers and 172 members of the House of Representatives visited the IJAAF Aviation Technical Research Department in Tachikawa.
They all boarded a special train at 09:00 in the morning and after reaching Tachikawa station, went to Tachikawa airfield where they met the Research Department's commander Maj Gen Yasuda Takeo* who introduced them to the various IJAAF aircraft types. After 11:00 they were presented with a formation flight of 34 Army airplanes and mock air battles. Following these, all of them expressed their desire to fly, but only 41 were picked for a flight on board what looks to be a Nakajima-built "Sally" Model 1, a Nakajima Ki-34 "Thora" and at least one more aircraft, wing edge visible on the left side.
Among the politicians were Ogawa Gotaro, Minister of Commerce and Industry (maybe 2nd from left in the photo), Matsudaira Yorinaga, President of the House of Peers at the time (5th from left). 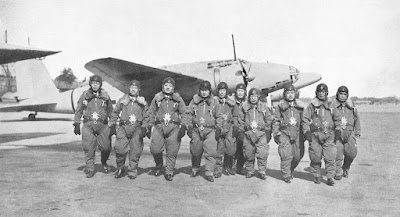 Note that the Tachikawa "Sally" does not have any tail marking as was common with most, if not all, aircraft of the Research Department.
*The English Wiki mentions that Yasuda was "a strong advocate of the use of suicidal ramming tactics against American bombers.". The Japanese Wiki page says that when "suicide attacks" were proposed in March 1944, he expressed his strong opposition and that was the reason why he was relieved from duty.
Note his involvement in the "Japanese Atomic bomb".
Posted by Arawasi

Very fun indeed to see all those politicians packed in their flight suits!!