A quite interesting "Sally" Model 2 today with an unusual, for a "Sally", camo scheme. 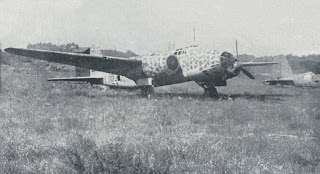 The aircraft was found at Chofu airfield and it is said that it belonged to the Giretsu. There is absolutely nothing to indicate any connection with the Giretsu, the camo is wrong, there is no tail marking and there are other details that don't fit.
Sakurai-san, the 244 Sentai researcher, mentions that immediately after the end of the war, high ranking military officers were urgently called to Tokyo. Transport aircraft from various shireibu hikohan flew to Chofu, so maybe it belonged to one of them. I find this as more probable.
The tail marking, though, (if there ever was one, only a hole can be seen) is closer to the bottom of the rudder, an area usually reserved for a number, not a tail marking which would have been applied in the middle of the tail or higher.
A puzzing and interesting bomber.
Posted by Arawasi

Thank you for this run of "Sally" information and photos.