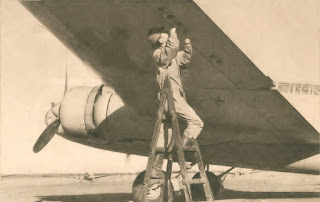 In the first photo, a crew member is checking the aileron control rod through the access panels. 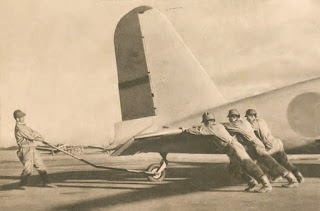 In the second photo the crew members are pulling and pushing the bomber on the tarmac to bring it to...I have no idea, starting line? The Seibi Gakko had a black or red (? check here) band with a different hiragana on top to indicate the individual aircraft. In the photo above the hiragana has been censored, but I would say an う (U) or an え (E) are possible. The guy pulling the plane is using a tail wheel tow bar (check here)
Note the Ki-27 "Nate" in the background. 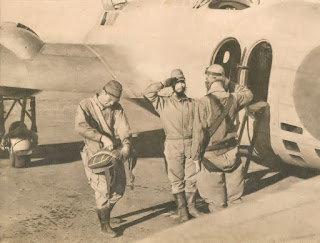 In the third photo the crew members are saluting each other before getting on the bomber. Note the bearded guy, an unusual sight for a Japanese, right? Beards, moustaches and facial hair in general were actually not that unusual for the Japanese officers, not for the common soldiers, as long as they were trimmed and well kept. Being unshaven, was ofcourse not allowed.
The officer handling the parachute is wearing a sash indicating he's on active duty that day.
Note the overall hairyokushoku of the aircraft and the darker hairanshoku interior blue on the door and the dorsal gunner's position. 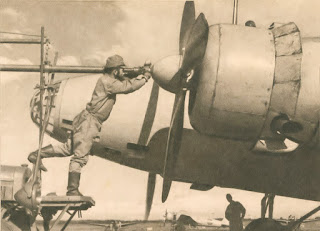 In the fourth photo the crew member is attaching the starter truck rod to the spinner. This was not the most common method to start a Ki-21. "Sallys" had electric starters, alternatively they used hand operated crank (see here) and only if the engine was too stabborn or the weather was way too cold, they would use the starter truck. Note the "Sonia" in the background. 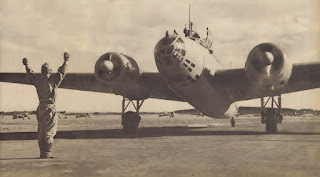 And finally in the fifth photo the plane is ready to taxi for take-off with more "Nates" in the background.
Posted by Arawasi

Looks like the same dude with the beard hooking up to the starter truck; what officer would do that?