Another photo from a vintage December 1942 magazine this time showing a "Pete" on the beach of a Southern Pacific island with its crew walking away after coming back from a mission. Note that the floatplane is resting on its trestle in front of a scaffold usually used for propeller or engine changes. 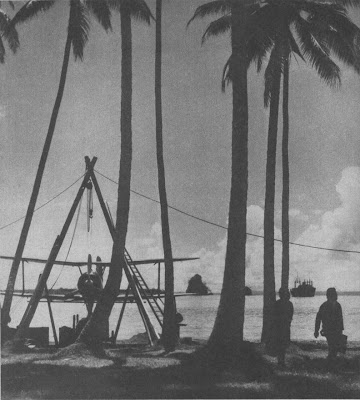 Jean Barby from France added:
"This island is nothing but the shore opposite of Lakunai airfield in Rabaul. In the middle the "brothers" can be seen, they appeared during the volcano eruption in the early 30's. A long time ago I did a couple of dives there, and there are many wrecked barges at the bottom of the two rocks. There are about 40 ship wrecks in Simpson harbor, the bridge of the closest is 120 feet from the surface, the others are further down. Keep in mind that I was there in 1979, and that there were no decompression chamber in case of bends or decompression troubles. Only single tanks were available thus limiting the length and stay at such a depth. Nevertheless one Pete is accessible from the shore and is in fairly good condition (probably less now!) Some pretty good wrecks were still in the bush around Lakunai. A Ki-21, remnants of some Ki-43 and of a twin engine which could be anything from a Ki-46 or a J1N1, and even an in line engine from a Ki-61 or a D3Y2; all those treasures are now buried under heavy ashes as Rabaul was destroyed by the eruption of the volcano close to lakunai, the Mother, in 1994. The new capital is now Vopopo; I also went to Tobera and Vanukanau but had little time to investigate."
Merci beaucoup for the excellent first hand information. If there are underwater photos from dives, we would be most interested to see.
Posted by Arawasi

To be honest I didn't know the real name of the Pete! Reikan then! A wonderful idea for a diorama too!
Panagiotis.

I put the photo up especially for you because you asked how the engine lifting "crane" looked like.
Would love to see a diorama from an expert like yourself depicting this scene!

Thank you very much Giorgos!
Consider the dio dedicated to you!
Cheers,
Panagiotis.

Thanx Giorgos! I'll do my best-I've got some guys wearing these funny underpants in my mind too!-as soon as I finish with my Saiun project of course!!...