The Navy Type 90-2-2 Reconnaissance Seaplane (E4N2) was a modified version of the Vought O2U Corsair; a type Japan had acquired the manufacturing rights of.
In this cover of the January 27, 1937 issue of "Asahi Graph" E4N2s belonging to the Kasumigaura Kokutai are flying in formation during the first massive flight of the year. More than one hundred seaplanes and carrier aircraft took to the skies and flew once around lake Kasumigaura, very close to Mt Tsukuba. The photo was taken by Asahi cameraman Shigeta from a Puss Moth flown by pilot Komata on January 9. 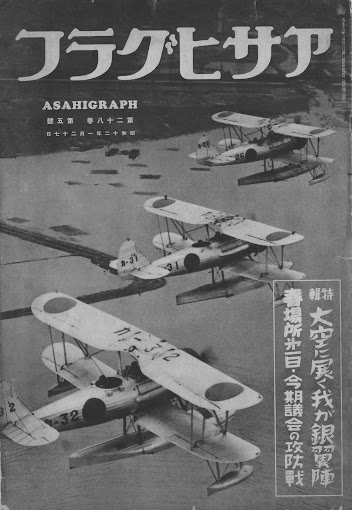 As far as I know this type did not serve in the Pacific War (but perhaps as a trainer?)
Did the E4N see combat in China?