In this photo from a vintage publication second from right War Minister General Sugiyama Gen (Hajime)  is arriving at Ming Ku Kung (Daiko) airfield of Nanking (Nanjing) on April 14, 1938. He is flying with a Nakajima built DC-2 during his China front inspection from April 12 to 21. In December of the same year he was assigned as commanding general of the North China Area Army.
The DC-2 is one of the five Nakajima built under licence from Douglas from February 1936 to 1937. They were pressed into military service in 1938 and received military camouflage as can be seen in the photo. 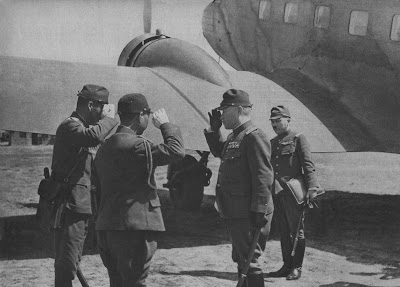