Ki-90... A DREAM THAT DIDN'T COME TRUE
Around February 1938, there were discussions between the Army and Mitsubishi on the subject of building the Ki-90. The Army planned to cooperate with the Junkers company in redesigning the Ju 90, a four-engine, 40 passenger, aircraft. Their goal was to produce ten aircraft in an effort to establish a fleet/formation of transports. For the redesign, 30 technicians from the Army and 20 from Mitsubishi were to be selected and dispatched. In an effort to cover the necessary expenses of this venture, soy beans from were to be exported to . Personnel were sent to with urgency to begin negotiations. Only the best electronic equipment was to be installed.
There were no joint examination meetings between the Army and Mitsubishi and some people had misgivings about the project. Nevertheless Mitsubishi Heavy Industries and the Army's consultants gave a very urgent go-ahead without any investigation or study because the departure date of the group bound for Germany was so close at hand.
On May 27, 1938 the Yasukuni Maru departed from with the head office's business section chief, Takeda Jiro and other official personnel to begin the advance of the project. On July 25, five people from Mitsubishi visited Junkers in . During the conference, various types of aircraft, including the Ju 90, were displayed in flight. All negotiations proceeded verbally. Many topics were discussed, such as the possibility of installing a made air cooled engine, armament, bomb load etc. A general design and performance statement was requested by the Junkers designers. After providing them with this information, we returned to and awaited a reply.
Since after some time, no answer was forthcoming, we sent a reminder. Still not having received a response, we went to the Japanese embassy and visited ambassador Osima in an effort to expedite receiving the necessary documents from the German executives.
On September 9, people concerned from both and gathered in at the Junkers plant; hopes were high. During the meeting, the Junkers representatives showed us what their research had come up with, presenting a simple general design of the Ki-90. However, they went on to say that because of the seriousness of the European situation they would be unable to tie Junkers factories up with a Japanese bomber design. They also asked us to try to understand their situation.
Reluctantly, we gave up on Junkers and moved to negotiate with Focke-Wulf in an effort to turn the "Condor" into a Ki-90. The people at Focke-Wulf were eager to cooperate and flew a Condor to to show us [Mitsubishi] and the Army the performance of the aircraft. The Army didn't like it. When we later realised what the "Condor" was to become, the "Devil of the Atlantic," we had regrets about the Army's decision.
So, another plan was made to negotiate with the American company Boeing and I left for America from Germany. In March 1939, I spoke with executives of the company at their Seattle factory. I was told that designing a Japanese bomber inside the company would not be possible but that cooperation in creating a joint design could be done in a hotel room or office used by the Japanese. I was told that after the aircraft's design was completed, it would be possible for Boeing to get government permission to manufacture it. As the Army continued considering the issue, the world situation worsened, and as a consequence the Ki-90 plan came to nothing.
(Author: Former Mitsubishi Heavy industries engineer)

Akimoto Minoru-sensei in his magnum opus "Nihon Rikugun Shisakuki Taikan" (All the Experimental Aircraft in Japanese Army), Kantosha 2008, has two entries for the Mitsubishi Ki-90 and explains that "Ki-90" was only a tentative name for the joint Japanese-German project.
Details about the actual Mitsubishi Ki-90 project were included in a 1943 plan for future aircraft. The Ki-90 was to be a short range bomber able to 1. attack enemy airfields and aircraft on the ground, 2. liaise with ground forces and 3. attack naval vessels. Although horizontal bombing would be it's main role, the dive bombing option could also be possible. Halfway range was 1,500km plus two hours of extra flight. Normally the aircraft was to opperate between 4,000 and 10,000meters. Armament would consist of two 20mm and two to three 13mm cannons. Normal bombload is mentioned as 500kg but for short distances this could be augmented to 1,000kg and the aircraft should also be capable of carrying a torpedo.
March 1946 was the date for completion of all testing but the whole project remained only a plan. 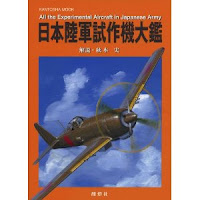 Although the publication is pricy ($US57), all in Japanese, with not that many or big photos I have no qualms whatsoever to recommend this book to any Japanese X-plane fan. E-mail us if you want a copy.
Posted by Arawasi