In Japan, National Foundation Day is a public holiday celebrated on February 11 every year. In 1937 the celebrations included a commemorating flight organised by the Teikoku Hiko Kyokai (Imperial Aeronautic Association). No less than 38 civilian aircraft flew over Tokyo split into three groups and taking off from Tsudanuma (Chiba), Susaki (Tokyo) and Haneda (Tokyo) airfields.

In the photo below a group of civilian Yokosho K2Y flown by students of the Nippon Student Air League in formation over Tokyo bay. Their civilian registrations are: J-BAQP, J-BAFP (or J-BAPP) and probably J-BAMF. 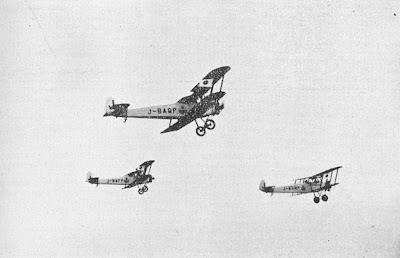 Taken from the passing aircraft a photo of Sumida river with a fleet of river boats taking part in the celebrations. 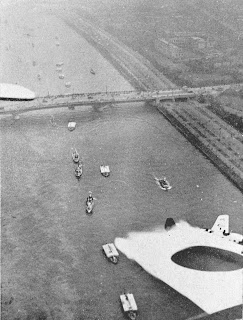 A photo of the second group taking off from Susaki airfield in the Tokyo bay. The two clearly visible aircraft are Salmson 2.A2 belonging to the Asia Flying School with civilian registrations J-BFDR and probably J-BFDY.

Susaki was the lesser known airfield of Tokyo located in Koto Ward.

We hope you don't mind a touch of culture, sharing the marvellous ukiyo-e by master Hiroshige. It is the 107th image of his "One Hundred Famous Views of Edo" and is entitled "Fukagawa Susaki and Jūmantsubo" 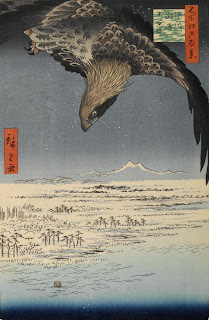 The insignia on the Salmson 2.A2 is interesting, having to do with the flying school I assume?

The ukiyo-e fits right in, I think. Beautiful!

halo friends
only a small correction and clarification.
On the first picture are not Avro 504K, but Yokosuka K2Y with civil registration J-BAQP, J-BAPP and J-BARP flown by students of Nihon Student Air League Marine Section in formation over Tokyo bay.
greeting
Erik - (fugaku1706) from Czech Rep.