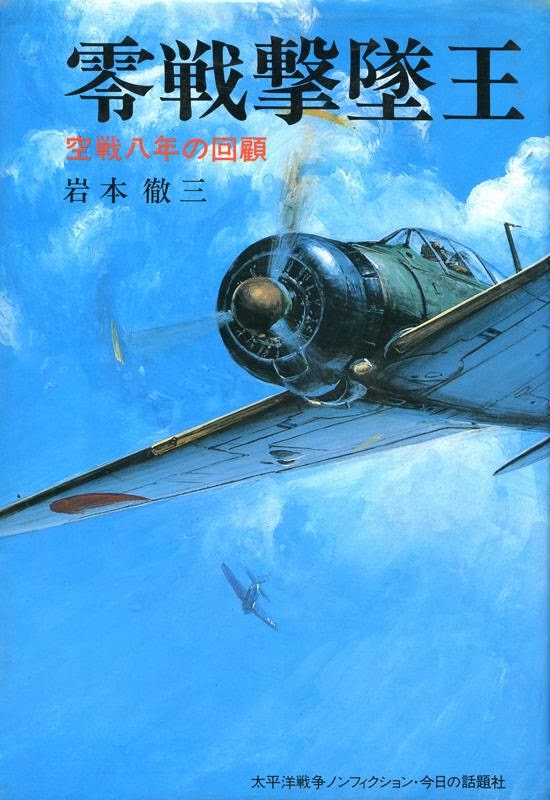 Title: "ZEROSEN GEKITSUI O" (Zerosen Ace)
Author: Iwamoto Tetsuzo
Published by: Konnichi no wadaisha, Nov. 1987, h/b
Pages: 328, Size:14 X 20cm.
Iwamoto Tetsuzo is one of the most famous IJNAF Aces and this book follows in great detail his personal eight year long fighting history. The Wikipedia entry is HERE but we would like to add a few details after China.
In December 1938 he was appointed as a trainer in Oita Ku and from November 1939 to Suzuka Ku.
In 1941 he was assigned initially to the aircraft carrier Zuiho and then Zuikaku from which he participated in the Hawaii operation in patrol duties.
From 1942 he took part in operations in the Bismarck Archipelago, Ceylon (Sri Lanka), Celebes (Sulawesi) in Indonesia, Taiwan, Solomon Islands and Truk (Chuuk) and then the Aleutians. In August 1942 he was transferred to Omura Ku as instructor, then in October to Yokosuka Ku and in December to Oppama Ku.
From March 1943 he was assigned to the Northern area with the 281 Ku and from November he was transferred to Rabaul. He was further assigned to the 204 Ku and then the 253 Ku until he ended up in Truk in February 1944. From June 1944 he returned to Japan and was assigned to the Kisarazu, Iwakuni and Mobara. From September he served with the 316 Fighter Hikotai of the 252 Ku and a month later he took part in the battles over Taiwan and then the Philippines.
1945 found him serving with the 203 Ku, in Iwakuni base, fighting over Okinawa until the end of the war.
The book was published after his death largely based on his personal notes with the help of noted aviation historian Hata Ikuhiko. Of special interest are his notes, reproduced in the book, where he claims 202 kills!!!
Below is a rough translation of the account of his first Pacific War victory during the Easter Sunday Raid against Colombo, Ceylon (Sri Lanka).
"On April 5, 1942 at 06:00 in the morning the order arrived for the bombing of Colombo. The Japanese fleet had in its strength 180 airplanes (36 fighters, 54 dive bombers and 90 torpedo bombers) but Iwamoto was on air patrol duties. An hour after the attack planes took-off, the Iwamoto shotai (section usually of 3-4 planes) was on stand-by on the deck of Zuikaku. A destroyer in front of the aircraft carrier gave the signal of the presence of an enemy plane. All 24 fighters on stand-by on the various carriers took-off immediately but Iwamoto’s shotai took-off faster than everybody else. Immediately after take-off Iwamoto got rid of his drop tank and started flyng in circles above the destroyer at an altitude of 2,000m. In the area in front of the destroyer at a height between 1,500~2,500m there were many small clouds obscuring vision and although the planes from the other ships tried to spot the enemy plane between the clouds, they failed to locate it. Iwamoto was about to give up and all fighters from other aircraft carriers started returning to their ships but he decided to make another round above the area.
"Suddenly he saw the main cannons of the destroyed shooting and even though he found it odd he flew towards the direction the cannons were firing. Between two clouds below him he spotted an enemy plane and gave the order to his shotai planes to attack. At full speed he flew behind a cloud from where he was able to figure out that the enemy plane was a small size flying boat flying among the clouds trying to spot the Japanese fleet. The altitude was 1,500m and his shotai planes were at 3,000m. Although they were hiding between clouds the enemy flying boat was able to spot them and increased speed trying to hide between clouds. But it was too late and Iwamoto immediately from behind and above was the first to shoot the flying boat on its back. From the port engine smoke started coming out and the gradually the other four Japanese fighters attacked the plane. Iwamoto returned for a second passage and noticed that the plane was badly shot up, flying at very low speed barely managing to stay in the air. Nevertheless the rear gunners were still putting up a fight shooting at the Japanese planes. Iwamoto ignored the bullets and continued the attack from as close as 50 and even 20 meters using both his 20mm cannons and the 7.7 mm machine guns. In the end flames started coming out from the gasoline tank of the plane until it fell in the sea in a ball of flame. He noticed that from the flying boat crew 2-3 survivors were swimming by the plane. Looking around him he saw planes from Akagi, Soryu and Hiryu but none took part in the battle.
"On his way back to Zuikaku the engine of his plane started vibrating. When back on his the carrier the prop had a hole through and through, an engine cylinder was broken and there was a bullet stuck on his gunsight probably from the machine gunner during his second pass; a few cm and it would have hit his head. The flying boat, a Consolidated PBYa was his first victory in the Pacific War."

I tried to find more information about this engagement from on-line sources.
The Catalina that first spotted the Japanese force was flown by RCAF Leonard Birchall but although the conditions and the descriptions are very similar, all sources agree that his flying boat was shot down on April 4, one day before the bombing raid Iwamoto mentions.
Then I tried to find more information about the Catalinas stationed in Colombo and whether they had any more casualties. This article in particular, which I found to be the best, seems to collaborate Iwamoto's account that a second Catalina was shot down on the morning of April 5:
" Unfortunately, Somerville did not receive accurate intelligence on Nagumo’s movements. Following Birchall’s sighting report on 4 April, which apparently did not indicate how many carriers Nagumo possessed, other Catalinas were dispatched to regain contact, and, starting at 0700 hours the following morning, Somerville launched air searches ahead of Force A. Numerous sightings were made, but the reports were incomplete, contradictory, often late, and, in some respects, just plain wrong. This is easily understood when one remembers that the search aircraft were highly vulnerable to the defending Zeros, which shot down an RAF Catalina in the morning and an Albacore from Indomitable in the afternoon. Consider this account from the second pilot of a RAF Catalina that found Nagumo on the morning of 5 April:"
"Bloody Sambles" Vol II by Shores, Cull & Izawa states on p. 405 that the Catalina was flown by Flt Lt J.R. Graham and belonged to the 205 Squadron.
Posted by Arawasi