A still from a film featuring a vary rare type of Nakajima J1N "Gekko" found after the end of the war. In FAOW#57 it is identified as J1N1-F but in others it is simply called a variant of J1N1-R. It is based on the early reconnaissance version of the "Gekko" with additional defencive armament for long range missions.
Planning for this type started from 1943 and the first prototype was completed between the summer and autumn of the same year.
The observer's middle seat was removed and in its place was a turret with two German 13mm MG 131. Various turret and armament combinations were tested included a turret with a 20mm Type 99 2Go cannon like the one installed on the Kawanishi H8K "Emily", which was based on a French type .
The design had serious buffeting problems and although at least a dozen wre built it was not placed into mass production.
The aircraft in the still belongs to the Oppama Ku as indicated by the "オヒ" (OHI), the only visible part of the tail marking. For more on the unit, check here.
A photo of the same aircraft from a different angle is in "Broken Wings of the Samurai" p. 58. 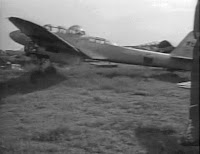 And I thought only the British had the ability to add enormous, useless turrets to perfectly good aircraft! :) very interesting photo!

What Peter said.
I'm not an engineer or aerodynamicist; but even a layman can imagine the airflow problems that huge bump of a turret would cause. Buffeting indeed!


Nice picture of this very interesting plane, one of the two J1N1's with a turret at Atsugi airbase. Looks like you have some remarkable footage.
thanks for showing.