In THIS NHK video link you can see a short clip featuring Nakajima Ki-84 "Hayate" and listen to the "Hayate" song.

The lyrics in Japanese, for those interested to sing along, are the following:

Our English translation is the following:

"HAYATE" FIGHTER SQUADRON
1. Gathering the anger of a hundred million people
Sharp wings cut the sky
Look! The noble aircraft that controls the sky.
The ugly enemy wings that invade the country of gods
And our aircraft that challenge them in the final decisive battle
God-eagles Hayate Fighter Squadron

2. Overcoming great obstacles (and flying) for a great distance
Today they take a rest under the shade of the palm trees
Under the Southern Cross
We become the shields that protect
An answer to the invading aircraft
Land-eagles Hayate Fighter Squadron

3. Flying with our beloved aircraft through squalls
The rough weather cleans our wings
Nothing can interrupt our mission
In the middle of the enemy fleet
Our elite aircraft (fly) in high spirits
Wild-eagles Hayate Fighter Squadron

4. Finished our training in high spirits
Young like buds (who haven't bloomed yet), but men enough
Still 20 years old but this is our battle
We will take the enemy combined fleet with us (to heaven)
Fallen like pedals in the wind, our special attack aircraft
Wild-eagles Hayate Fighter Squadron

Below are some stills from the clip. 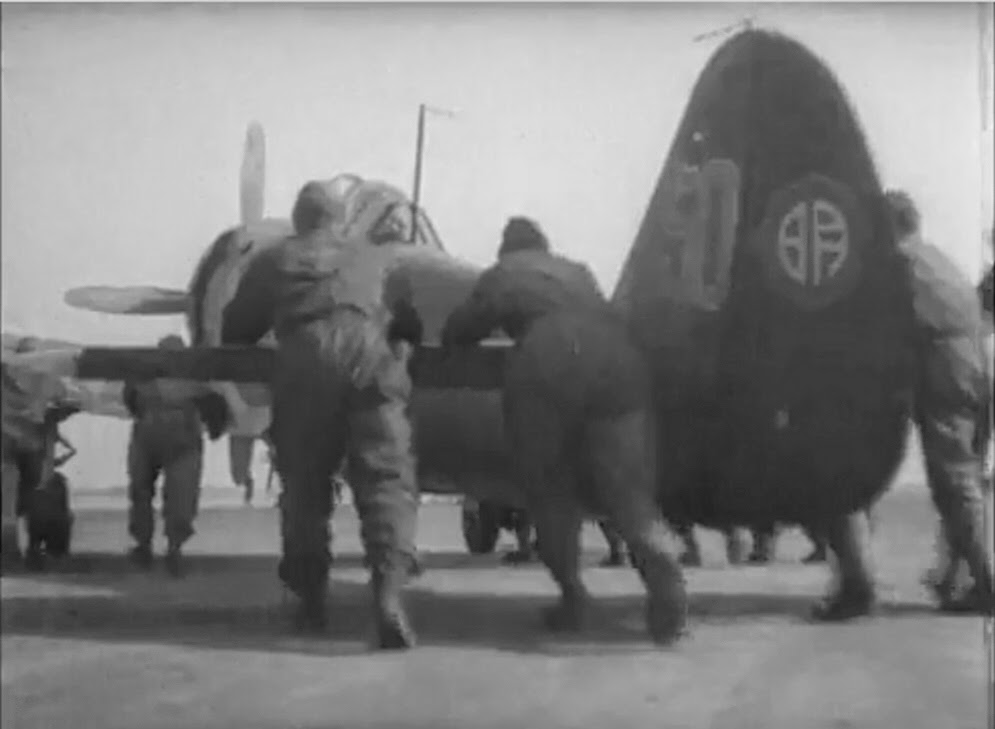 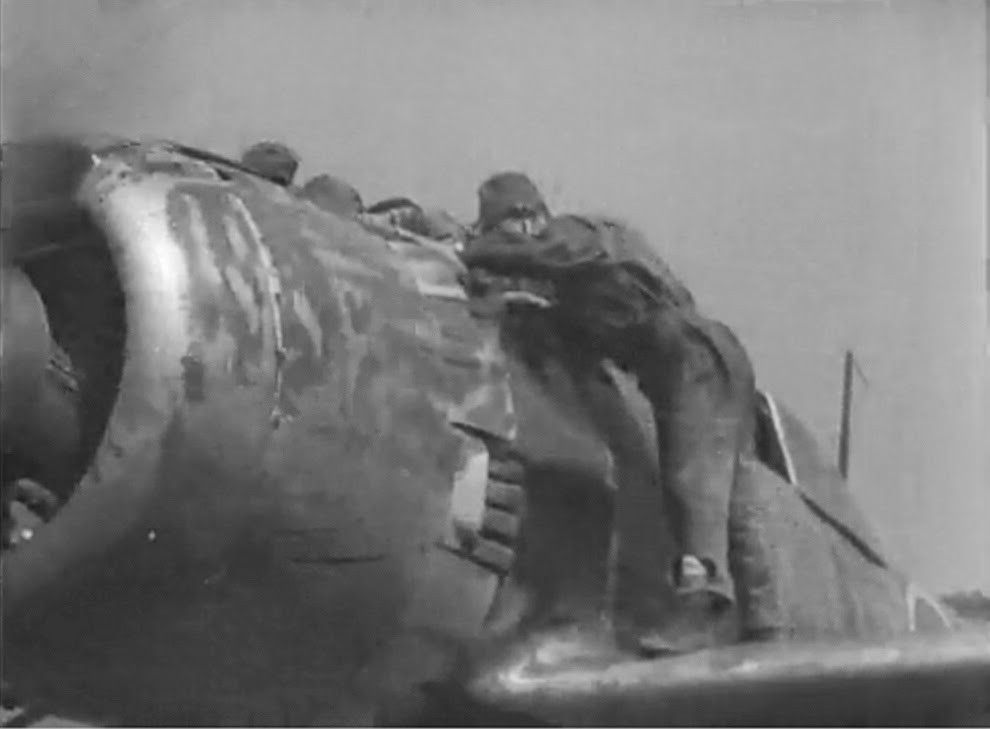 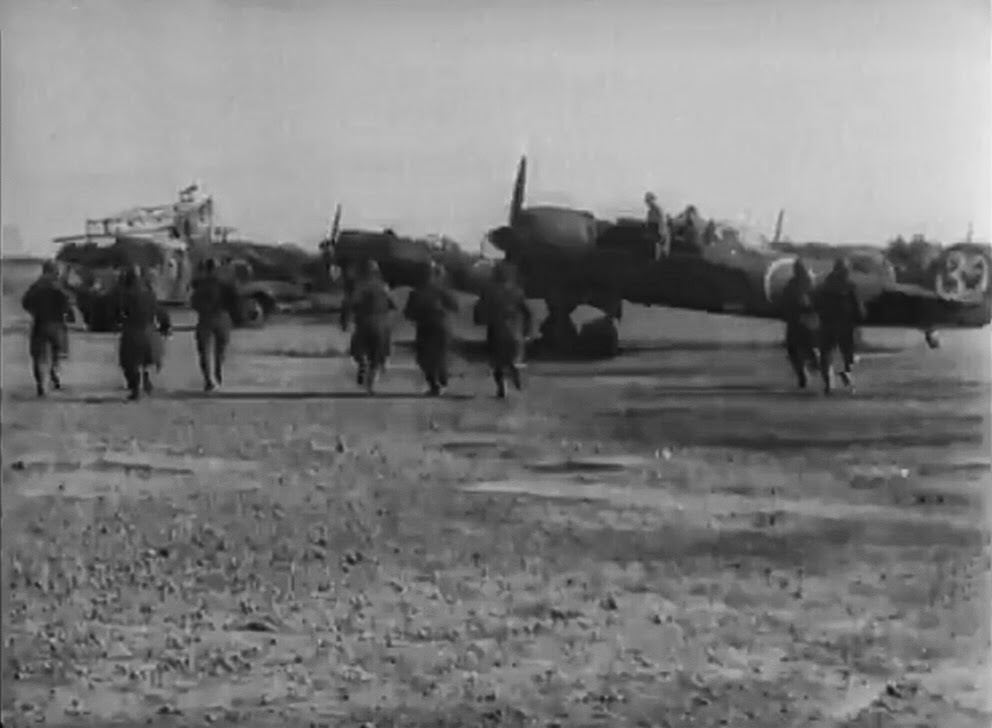 All the aircraft belong to the Akeno Kyodo Hikoshidan (Akeno Instructor Air Division) from which the 200 Sentai was formed on October 12, 1944. It had six chutai with unit CO LtCl Takahashi Takeshi, the former 24th Sentai CO. The unit sub-commander was Major Sakagawa Toshio, former CO of the 25th Sentai and famous for his days in the China front.
It was supposed to be an elite unit, the first to be exclusively equipped with "Hayate". Nevertheless, three chutai commanders had experience only with other fighter aircraft types and apart from a few higher ranking officers all the pilots had no combat experience at all. Just when they finished their familiarisation with the new fighters, and before undergoing any combat training, the unit was ordered to advance to the Philippines. Chutai 1~4 departed on October 21 with 50 aircraft led by commander Takahashi. Many returned back to base and by October 23 only 12 managed to reach Luzon. The next day the remaining 35 aircraft took-off arriving in Sarabia base on Negros island. They participated in the battle of Leyte but most aircraft were lost due to technical troubles and the bad condition of the airfield. By the end of October although they claimed seven enemy planes shot down, 11 "Hayate" of the unit were lost to suicide attacks, leaving only nine aircraft in flyable condition. From November they joined the 22nd Sentai and continued participating in the battle of Leyte, attacked Tacloban airfield with "ta-dan" bombs and participated in the air defence of the Bacolod area. Although they lost a significant number of aircraft and personnel, the gains were minimal. From November 1st to 23rd, 19 aircraft were lost to suicide attacks and 35 planes were damaged beyond repair.
On May 30, 1945 the unit was disbanded.
Posted by Arawasi

Really atmospheric! Thanks for sharing!

I think the clip may have been taken down as a search on 200 Sentai, Ki-84 and "Hayate" didn't produce anything at NHK. Your breakdown of the history is much appreciated.

Can you tell me how I should cite your 4/25/2014 article? I am writing about my father-in-law's experiences at Dulag airstrip on Leyte.