As you have probably noticed we try to keep this blog focused on our beloved subject, Japanese aviation, with only a minimum of personal stuff here and there like holidays, football and whatever we feel the need to talk about. We do our best not to take sides or step on any toes but occasionally we feel that our toes have been stepped on. And we don't like it. So after a lot of thought and discussion about whether we should do it or not, we decided to start a series of very occasional posts, under the label "Grumble"*, about things relevant to our hobby/passion that happened and annoyed us...to put it mildly. As always, there are two sides of the story and naturally here we only present ours but we do hope to hear your thoughts.
So, here's the first story. In the "Labels" on the starboard side of this blog we have one called "Collector's items" with box covers of interesting, rare or little known kits we spot on the Japanese Ebay. On 8/2/2013 we presented this kit that was on sale on the Japanese Ebay. A "Dinah" in 1/48 by the very little known company "Lucky Sun". 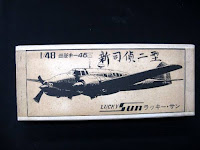 We were immediately emailed by a modeler who expressed his very strong interest to get this kit and asked if we knew anything about it. I made clear that I've never seen this kit in my life and knew nothing about it and he basically begged me to win it and get it for him anyway. Which I did and he expressed his satisfaction for the price and enthusiasm to get it into his hands. He sent me $US57, I went through all the trouble with the Ebay transaction, package and walk to the post office, and everything went smoothly....until he received the kit. And he didn't like it. Very soon there was trouble in our communication and since I didn't want to leave him unhappy, I returned the amount he had sent me to pay for the kit (the $US57). In other words he got the kit for free (yes, I'm that kind/stupid). Never heard from the guy again, no thank-yous for returning his money, and eventually I forgot the matter completely. A few months later I see a review of the same kit by the same guy on another blog dealing with Japanese aviation. I knew he did it on purpose to irk me but actually I didn't really care (in other words "st arhidia mou" as we say in Greece).
That would have been the end of the story and it wouldn't have deserved a post on this blog except that a couple weeks ago I saw a posting by the same guy on a Japanese aircraft message board announcing that he's selling on the US Ebay the same kit for $US100!!!
I have heard about the problems people have with the ailing US economy. About mortgage payment and health insurance difficulties, kids in need to get an education and go to college, difficulty to find a job and put food on the table. And I have also heard about home kitchens urgently demanding an island, daughters that have to have a Ralph Lauren wedding dress for their happy day, a most needed family weekly holiday in Aruba, daddy's Porsche calling for a new paint job and other serious or less so issues. But honestly, unless there is some really big family matter, selling a kit you got for FREE for double the price you didn't actually pay, is nothing less but yet another typifying example of merciless, brutal capitalism. It is exactly THIS kind of effrontery Greece needs to revitalise its economy, my dear Greek readers. Plenty of arrogance and chutzpah. 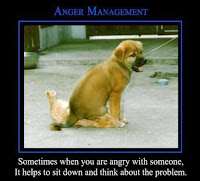 *I found many very interesting words similar to "grumble" like "quibble", "cavil", "grouch" and my favourite "kvetch". But I think "grumble" has a nice sound and I also found that it also means "pornographic materials such as magazines, internet sites or videos"...weirdly cool!
Posted by Arawasi

People like that are nothing less than oxygen thieves and deserve to be named and shamed. This particular person obviously set out to con you and he seems to have gotten away with it.

Don't get upset "deacon"!😊 S##t happens and add to our experience and handling of things...Hope the heat wave is finished there in Tokyo!
Cheers,
the "bishop"😉

I'd not have been so generous as you. As far as I'm concerned once the deal is done - like it or not - the goods are yours and that's the line I would have stuck to. A lesson learnt.

As a proud capitalist myself I want to just suggest that you might be reading too much into him. I think he's just a slug.

Fluffy,
I like the word "slug" even though I don't get it. I know it means "bullet". Do explain.

Since he got the kit it's his to do whatever he wants with it. He could sell it to a friend, on Ebay starting at 50$, I wouldn't find out, end of the story. But nooo, after the review on the blog, he wanted to make a good profit and had to announce the sale on a place where I could see it to spite and insult me.
Now the post on the message board with the sale anouncement is gone, so the story ends here and is just that. A story that happened to someone. Exactly as I have intended it to be.
As the "bishop" said it's an experience and the lesson learned is to be extra cautious, less trusting and always document transactions! Old lesson but still valid...moving on...oooommmm!

Did you see the extra material on the Japanese DC-5?

Placing the item and advertising it in a place to insult you is very low of him. That makes him a slug too.

I'll give you an example of a situation when I use he word. I like to build model planes and sell them on ebay. I love to give some history in the item description to attach the model to real life. Maybe add a photo of the historical aircraft. Sometimes another seller will do a rush build of the same aircraft and post it for sale before my auction is over and for a lower price. When I see it and notice that his description is just like mine with a few words changed I exclaim: "Oh, you SLUG!"

Okay, that was some grumbling of my own. Ha! But you learned what slug means. And I got to learn that "grumble" is slang for... stuff.

Cool Fluffy. I like it.
True story. Once a guy ordered and got a book from our on-line store. Two weeks later another guy asks on a message board where he can get the same book. The first guy jumps right in and gives the address of another on-line shop! I asked him why did he do that since he did get the book from us and his answer was "oh, but you are not sponsors of the message board and I can't post your link". Sure, but you could have sent our link by private email or let someone answer the question. He just couldn't get it. Would you call him a slug or just asshole?

Wow! Just wow! That's so bad. I get that a site wants to support the sponsors that support them, but... I wish that the interested guy had the info to choose for himself. I'd try to run an information type forum where the sponsor gets to advert and is the suggested source but not the exclusive one.

I'm not sure what I'd call him. But, yeah, I can understand why you are annoyed with him.

Your Ebay story is equally appalling. Damn.
Okay, last one, also true story.
A guy gets in touch begging me to find this rare kit for him. He says I'm the first he asked and I said okay, I'll try to find it for you. He says thanks a lot, appreciate it...A couple hours later I see a posting of his on a message board asking everybody for the same kit. I tell him, hey what the hell are you doing? Didn't you just "hire" my services? He says: I'm trying to increase my chances and you know if you find a second one we can sell it on Ebay. A few weeks later he has the nerve to ask me if I've spotted the kit and we had a conversation like the one Jules Winfield had with Brad:
https://www.youtube.com/watch?v=kbTYs1qOjZQ

Have a good one Fluffy. Thanks for sharing and the "slug". On second thought it would have been much better as a title than "capitalism".

The winning bid was $169 PLUS $23 in shipping. I guess the lesson here is never issue refunds. You are a kind person for doing so, even though it backfired.

Sounds like what I call "Money Grubbers" to me a low-life that makes their money by doubling or tripling the amount he wants (and usually gets)for the item. This really busts my chops when people do this and you have every right to be upset. I am being polite with my speech do not know how much you good folks will take

Greetings guys and gals. Here in Milwaukee we referred to a snail without a shell as a slug. When we used to garden in our backyard, we'd come across a number of slimy slugs while spading the ground, getting ready for planting. You know how a snail leaves a trail of slime as it perambulates, well, a slug is covered with that slime. And yes, they also have that pair of 'ears', or antennae, on their head, just like snails. Also, when we put a solid round in our shotguns, instead of regular shotgun shells, that was also referred to as a slug. Cheers, Gary.

Yes. Anonymous and Rene are absolutely correct. I should not have refund the guy. Lesson learnt.
Charlee, that's why the title of this piece is "capitalism"...
Thanks for the info Gary.