Back in April our friend Ryan B. requested a translation regarding the 22nd Sentai. It only took us a little more than two months but we finaly translated various sources and.. here it goes.
Maybe you remember that Izawa Yasuo has an article of his in MM#33 (1982). He also co-authored with Hata Ikuhiko the classic "Nihon Rikugun Sentoki-tai" (Kantosha 1973) which in English became the "Japanese Army Air Force Fighter Units and Their Aces" (Grub Street 2002).

The English version of the Hata&Izawa book unfortunately does not include the histories of each sentai featured in the Japanese version and Ikuhiko-san repeats the same material in the two publications with small differences.
Our third course was the book of Suzuki-san (details of which we will not reveal).
The 22nd Sentai started to organise on March 1, 1944 unit in Fussa, Tokyo (note the flag of the city) where the Rikugun Koku Shinsabu (Test Department) was located. On March 5, 1944 the organization was completed and on the 25 of the same month the unit relocated to Sagami airfield, Kanagawa prefecture equipped with pre-production Hayate and unit commander Major Iwahashi Jozo who was one of the Hayate test pilots in the Fussa Test Department.
On May 12 the unit received orders to advance to the Philippines but they were instead diverted to China where the fighting was hard.
On August 24 the unit arrived at Hankow base with 40 Hayate (H&I - 30 Hayate, Suzuki - 30 Hayate, August 19) in its strength and was placed under the 5th Air Army.
Their baptism of fire was on August 28 over Yueyang, Hunan province where Iwahashi shot down a P-40 with just one shot at the aileron but lost pilot Akai Shoichi.
The unit remained very busy flying constantly missions despite the complaints of commander Iwahashi.
Although many units had problems with new types of aircraft, the 22nd had many months of training so they were all pretty fluent with the Hayate. The radio installed was of high quality so it was widely used during take-off and interception missions. But later when the unit moved to the Philippines, there were constant problems with the radio due to the weather conditions.
In the end of September the unit received orders to return to Japan but while preparations were under way they received information that B-29s (MM#33 - P-47) had advanced to Xi'an, Shaanxi prefecture, so the next day they received orders to attack. Nevertheless the enemy airfield was at the very limit of Hayate's range, even with drop tanks, so only four aircraft took off on the morning of September 21. Their crew embers were commander Iwahashi, w.o. Kuga Susumu, capt. Saito and w.o. Kogun. Saito and one other pilot had a mishap during take-off so in the end it was only Iwahashi with either Kuga or Kogun that continued to their target. Over Xi'an Iwahashi intercepted a P-47 then started to strafe the enemy airfield but, according to official Japanese sources of the time, he crashed on P-47 that was taking-off at that time (H&I and Suzuki agree). Nevertheless US sources state that he was shot down by friendly fire and a P-47 claimed one Hayate shot down, so how exactly Iwahashi died has not been confirmed.
While in China the unit claimed 40 enemy aircraft shot-down or damaged admitting the loss of six pilots.
On October 2 unit staff members and the remains of the six fallen comrades returned to Japan mainland with transports of Chuka Kokku (China Airways Co., Ltd.) leaving behind them about 20 Hayate which were passed to the 25th Sentai.
There are very few 22nd Sentai photos.
In the Japanese H&I, p. 78 there is a photo of a Hayate, tail number 62, taken on April 14, 1944 when the commander of the 3rd chutai, capt. Kuroiwa Yoshihiko, suffered a mid-air collision with Kuga Susumu leading to the death of Kuroiwa. As seen in the photo, Kuga's plane had a clipped wing but managed to return to base. About three pilots were lost during training.
In FAOW#19, p. 67 there is a photo of 1st Lieutenant Funabashi Shiro, another member of the Koku Shinshabu, posing next to his Hayate with the number 932 (s.n. 932). Funabashi took part in Nomonhan, May and Indonesia and ended the war with six kills. 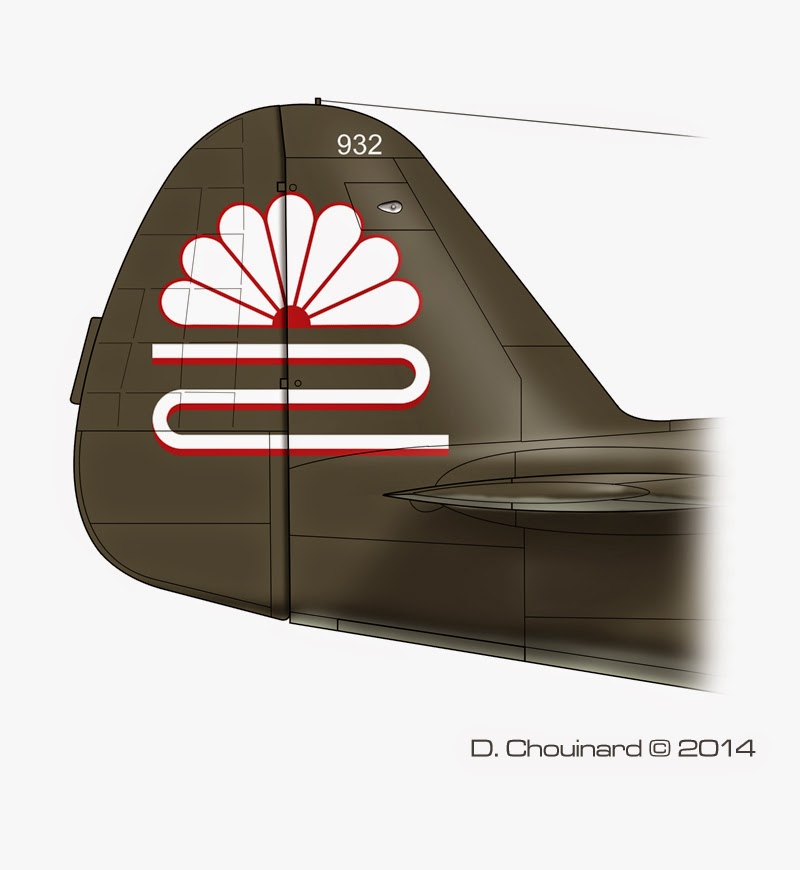 The unit marking as seen in the FAOW#19 photo. It is said that the hq had the tail marking in red, the 1st chutai in white, the 2nd chutai in blue and the 3rd chutai in yellow.
Artwork by Devlin Chouinard.
In Maru Mechanic #33 Akimoto-sensei adds that according to US reports when Iwahashi died his aircraft had the number 185 on the tail. If this is correct then it would be the 185th production hayate (mass production #58). Top colour was said to be green and brown in madara (mottled) pattern with silver bottom.
One more 22 Sentai photo can be found in Gakken #46, p. 37. The photo was taken in 1944 in the IJNAF base of Miho Kokutai, Totori prefecture, when a Hayate made an accidental landing (!). A rare photo of an early production aircraft fitted with the IJAAF standard model drop tank. The plane has dark green camouflage applied with airbrush.

Hasegawa recently released a limited "combo" kit in 1/72 with a 22nd and 51st Sentai Hayate. 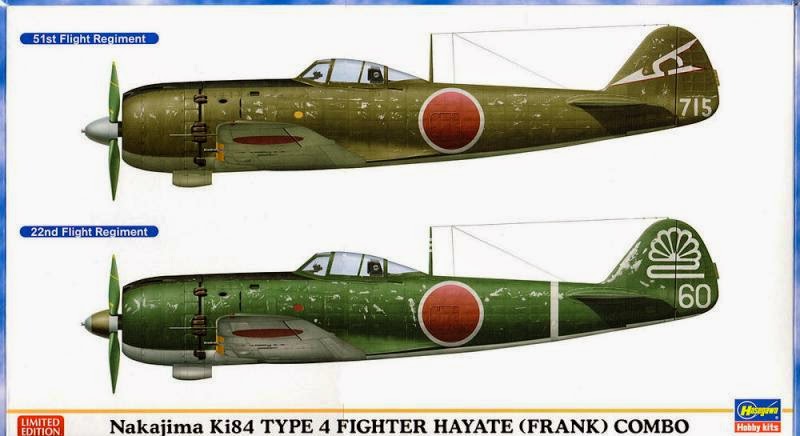 In 1/48 Hasegawa has released two kits. Does the box art look the "same" to you too? 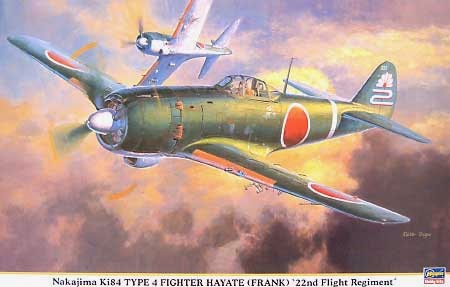 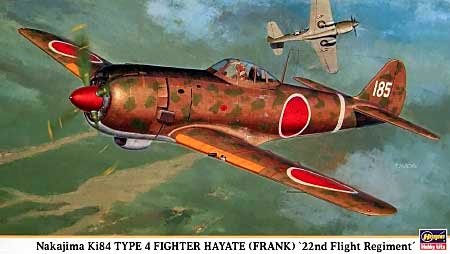 In the larger 1/32 scale it's the older Doyusha kit. 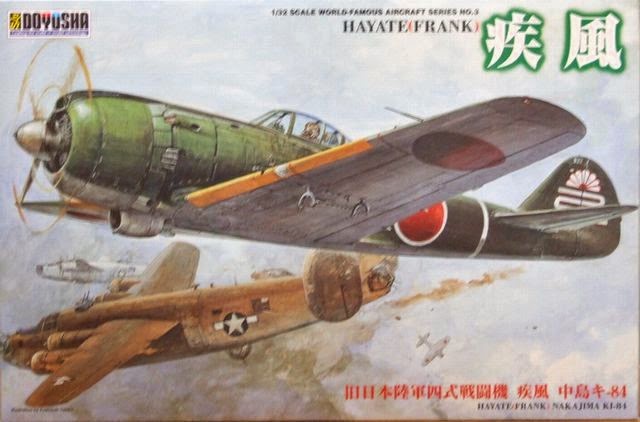