Two Army Type 2 Single-seat Fighters or Nakajima Ki-44 "Shoki" (Tojo) of the Rikugun Koku Seibi Gakko (Army Maintenance School) in Tokorozawa.
The aircraft in the foreground has all the surface panels of the port side removed to help with maintenance tutoring and lacks the starboard wing.
The aircraft in the background is in a more complete state. But note that both aircraft lack radio antennas. The typical tail marking of the Maintenance School is a horizontal bar with a hiragana above it. Akimoto-sensei states that the bar and the hiragana are black and indeed this is how it looks in many photos. Nevertheless there is also a number of photos where the band looks lighter than the hiragana.
Examples, in MA#329 (1989), p.61 middle, the hiragana "き" (KI) looks darker than the bar on the tail of the Ki-43 "Hayabusa" although in MA#395 (1992), p.33 top profile, illustrator Nohara Shigeru chooses to depict both as black.
Same in the photo on p.65 of Koku Fan Illustrated#80. Kawasaki Ki-61 "Hien" with hiragana "I" on the tail. And again on p.68, a Mitsubishi Ki-30 "Ann" with a brighter bar than the hiragana "HA".
In the Schiffer publication (1970) on p.30, top photo, "Shoki"  with dark "KO" on the tail seems again to have a brighter bar. Nohara decided to depict it with a red bar in the latest Model Art #779, Profile#5 (2009) p.110 although he is unsure about the white bands around the hinomaru.
That is exactly why color photos are so important. 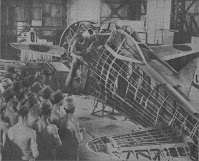