Apart from the Navy aircraft the film features a very interesting collection of civilian types, all belonging to the fleet of Asahi Shimbun.


J-BAWA was the fourth D.H.80A Puss Moth and the 10th aircraft in the Asahi Shimbun fleet and was purchased by the newspaper in March 1931. The aircraft was named "Ruri" (Lapis Lazuli).
In this first series of stills J-BAWA is taxing probably in Haneda airfield and comes to a stop in front of a big concrete hangar. 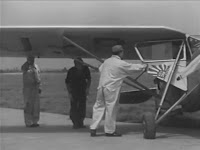 After the pilot, actor Hirose Toru, gets off the Puss Moth he walks towards the side of the hangar where he meets his "girlfriend", beautiful actress Miyake Kuniko, in front of another Asahi aircraft; Dornier Komet C J-BAMA. It was one of the three Komets and the 102th aircraft in the newspaper fleet. Kawasaki originally purchased one Komet C for the Army and one D seplane for the Navy but both failed to attract attention. Kawasaki modified them as passenger aircraft and sold Komet C to Asahi together with two (or three) more they built themselves. The original registration of J-BAMA was J-COHJ and became part of the fleet in February 1927. By the time this movie was shot it was on permanent display. 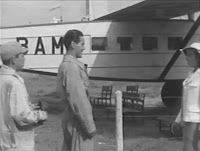 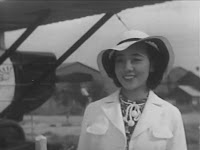 The last civilian aircraft appearing in the film is the Isikawajima T3 with the registration J-BBCA. Interestingly the inscription on the fuselage side says that it is the 58th aircraft in the newspaper fleet; not the 53rd.
The type was an experimental reconnaissance aircraft that failed to win in an Army competition of 1928. Ishikawajima eventually sold it to Asahi after modifying it into a communication aircraft for civilian use.
Note the beautiful paint job. Overall silver, with blue line on the fuselage top and Asahi markings on the top wing tips. 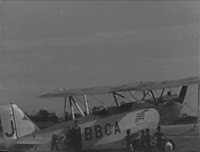 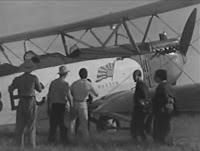 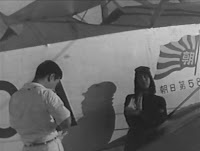 We hope you found this series of postings to your liking.
Posted by Arawasi

I, for one, have certainly enjoyed these posts. Something like this film is the next best thing to a time machine.

Thanks for taking the time to post these. Is there anywhere we can view this film?

I am with Peter!