The film gives us the rare opportunity to see many of the types the IJNAF had in their fleet at the time (1936).
A Type 90-2-2 Reconnaissance Seaplane or Nakajima E4N2 in a storage room together with a selection of engines. 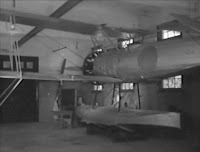 Two seaplanes are being pulled up on the concrete slipway of Kasumigaura. The one in the background is a Type 90 Training Seaplane or Yokosho K4Y1. In the second still the crew can be seen pushing the trailer for the K4Y1 into position while a Type 13 Trainer or Yokosho K1Y2 is already on the slipway. 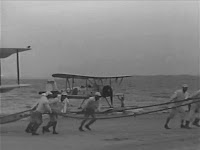 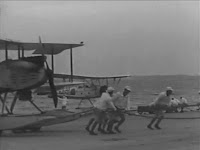 A flight of Type 90 Carrier Fighters or Nakajima A2N1 are taking off in front of a huge hangar possibly for airships.

Two stills of a Type 93 Advanced Trainer or Yokosuka K5Y1 "Akatonbo" (Willow), "カ-759" (KA-759),  in the typical finish of the time, silver overall, red tail, black markings on the fuselage sides and on the wings.
Plus one more still with "Willows" getting their engines started. 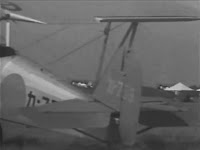 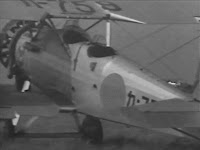 A top view of a line-up of "Getabaki Akatonbo", as the seaplane version of the K5Y1 was known at the time. 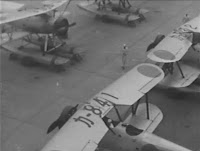 A line-up of Type 90 Crew Trainers or Mitsubishi K3M "Pine". 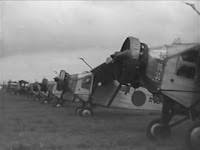 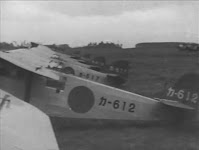 A rather interesting still showing ground crew members pulling a bomb on a dolly in front of a Type 13 Carrier Attack Bomber or Mitsubishi B1M2. 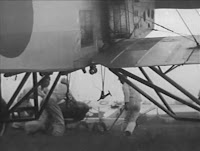 And last but not least a still with a big selection of Kasumigaura Kokutai seaplanes.
The four on the left row are probably Type 14 Reconnaissance Seaplanes or Yokosho E1Y2. In the foreground on the right is a Yokosho K5Y2, next to it a Type 15 Reconnaissance Seaplane or Nakajima E2N1 and then a Yokosho K1Y2. All the seaplanes in the back and on the seashore are probably Type 90 Training Seaplanes or Yokosho K4Y1. 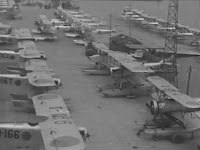