Story: Two young boys want to become pilots and take the exam of "Shonen Kokuhei". One failed in the final test and although he begged to be given one more chance he was rejected. As an alternative he joins a Civilian Aviation Company and is trained to become a maintenance crew member with a civilian airline. During his very first flight with a civilian pilot, they fly over the young boy's village but suddenly there is engine trouble...
The other teenager becomes a Navy pilot offering us some very rare scenes of IJNAF aircraft types in flight, especially of Navy Type 3 Primary Trainer or Yokosho K2Y.
Below are some stills from the film.
Most of them feature the K2Y2 "カ-469" (KA-469) belonging to the Kasumigaura Kokutai since that was the aircraft our hero flew with. Overall silver with red tail and black markings on the fuselage sides and wings. 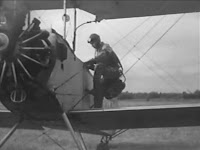 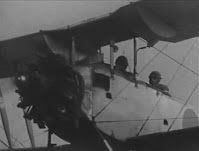 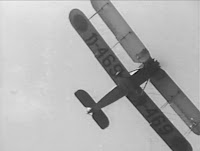 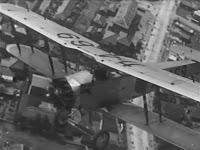