A photo from the July 20, 1927 issue of "Asahi Graph".
According to the original caption in English:
"H.I.H. Prince Takamatsu, brother of H.M. the Emperor, is seen in a Navy Avro plane in which His Highness has made first flight at the Kasumigawra Naval Aerodrome on July 5. After which he went through the whole course of flying art during his stay there for a week." 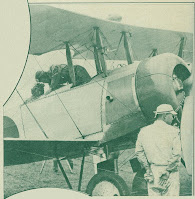 The aircraft is an Avro A.V. Roe 504 K trainer. The first sample was brought to Japan by the British Aviation Mission in 1921 led by Sir William Francis Forbes, 19th Lord of Sempill (don't forget to check the links). The Navy liked it so much that sixty eight more were imported from England along with 10 of the floatplane version until Nakajima took over production, building under licence 250 with 30 more built by Aichi. More on Price Takamatsu, here.
Posted by Arawasi