Three stills from a very short and very rare vintage movie clip showing a Navy Type 90 Crew-trainer or Mitsubishi K3M "Pine" belonging to the Suzuka Ku, as indicated by the katakana "ス" (SU) on the tail, taking off. 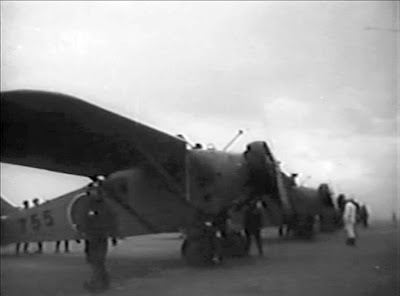 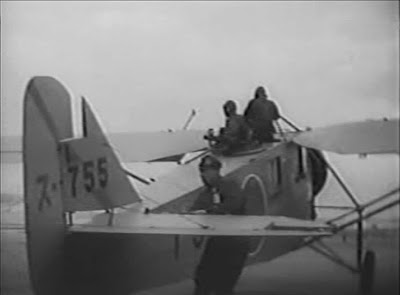 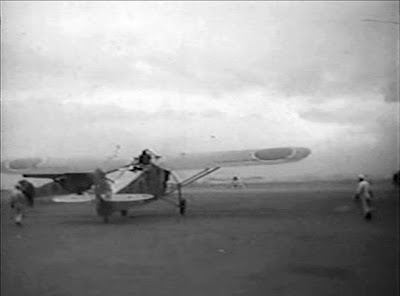 One of the best aviation artists in the world and a good friend of ours, Zygmunt Szeremeta created a beautiful side view of this particular plane, especially for our blog.

The Suzuka Kokutai was organised as a reconnaissance training unit on October 1, 1938 in Suzuka City, Mie prefecture. It was equipped with Mitsubishi K3M, Kyushu K11W "Shiragiku", Mitsubishi B5M1 and a single Zero-sen model 21 for defence.

Below is an illustration, from this blog, showing the Navy Air installations is Suzuka. 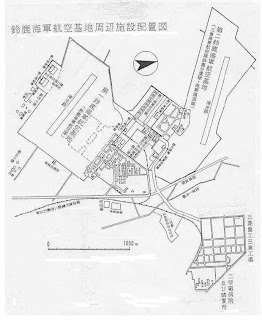 As you can probably make out there are two airfields. Suzuka Ku operated from the "Dai 1 Suzuka Kaigun Koku Kichi" (1st Suzuka Navy Air Base), top left.
The "Dai 2 Suzuka Kaigun Koku Kichi" (2nd Suzuka Navy Air Base), top right, was the home of units like the Mie Ku and from 1943 of the 1001 Ku which was a transport unit for Mitsubishi aircraft, material as well as personelle. Around the end of the War it was also home of the 1021 Ku, the 3rd and the 4th Reconnaissance Hikotai.
On the bottom right of the illustration is the Mie factory of Mitsubishi Heavy Industries.
Most of the buildings in the base were used by civilian companies after the War until about 1975 when they were gradually demolished.

As far as I know AZ model is the only company that makes a kit of the type in 1:72 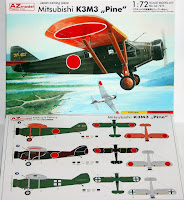 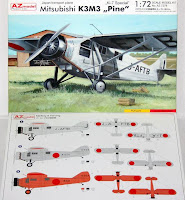 I also have a resin looking Japanese kit of unknown origin in a plastic bag I purchased many years ago during our visit to Germany (hi Joern).
Posted by Arawasi

Great. I love to know more about the lesser know japanese planes. Thanks a lot for the side view.